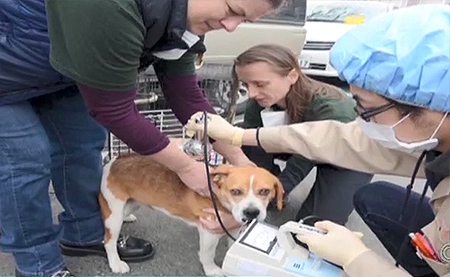 In increasing numbers, Isabella Gallaon-Aoki and other animal advocates have been quietly slipping into and out of the 20-km red zone around the Fukushima nuclear plant to rescue pets and feed animals deserted in the mass evacuation.

They wear basic protective gear, well aware of the risks they face in the radiation ridden neighborhoods they canvas in search of stranded pets and livestock. They arrive with lists of addresses and animal descriptions given to them by heartbroken pet owners forced to flee after the meltdown. They are angels working in the midst of hell, and their efforts are nothing short of heroic.

“I understand the nuclear danger and everything, but they’re just being left to starve to death, basically,” said Gallaon-Aoki with Japan Earthquake Animal Rescue and Support. 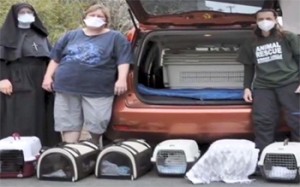 She and others like her have been moved to act on behalf of the stranded pets after learning that the Japanese government made no provisions for saving animals left behind when their owners were forced to evacuate. Gallaon-Aoki said it was unforgivable that the government would allow animals to be left to slowly die of starvation or radiation exposure.

“I understand they have a huge problem as far as people are concerned. They are dealing with a lot,” she said. “But, I mean, there are people and groups who would be willing to help, and surely they could kind of set some sort of well-coordinated effort.”

CNN reporter Kyung Lah takes gives us a closer at the deserted danger zone, the animals left behind to fend for themselves, and the heroes who are literally putting their lives on the line to save them.