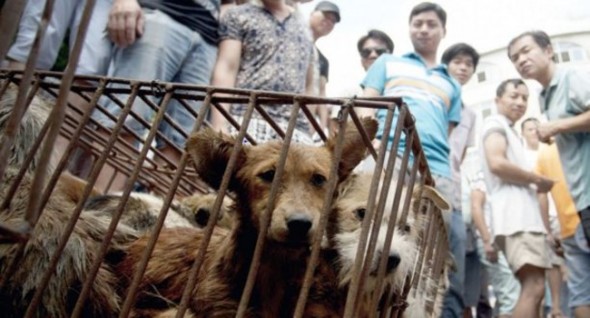 “Preventing cruelty to animals is the sign of a mature, civilized society,” a representative from the VShine Animal Protection Association told the Washington Post, and as such – the organization alone with a coalition of animal rights groups – is working to shutter an annual dog meat festival.

The event, said to be responsible for some 10,000 dogs – reports say this number includes stolen family pets – is now in its sixth year in the rural and largely low-income province of Guangxi Zhuang. Animal advocates cite the festival as a public relations nightmare where China’s reputation, for both animal rights and food-handling practices.

Dogs are reportedly trucked in for a mass slaughter, often in sight of one another, as the practice reportedly – say some local restaurateurs per the Washington Post – infuses the meat with fear-based adrenaline, thereby improving its flavor.

While advocates work to prevent cruelty, many add that banning the festival will make Chinese citizens healthier, as well. Guangxi is among China’s regions most affected by human rabies. Dog meat can also carry diseases such as cholera and trichinellosis.

Events around the nation in favor of banning both the festival, and the practice of eating dog meat, have been gaining ground. The event has moved largely underground, but advocates are distressed that China’s animal cruelty laws – including the prosecution of dog thieves – are too soft.