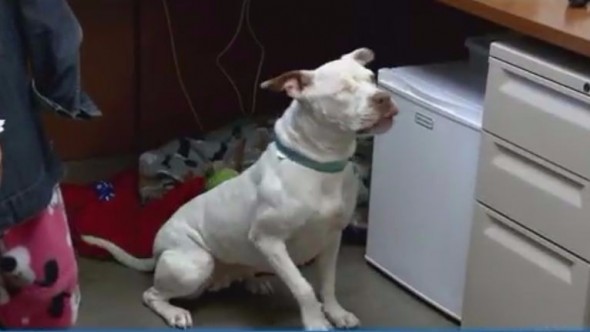 During the 1950s and 1960s in the United States, there were many civil rights demonstrations that took place across the country, one of them being called a “sit-in.”  Typically, those fighting for equal rights would “occupy” a space where they were not legally allowed, often sitting right on the ground somewhere, until their point was made or they were arrested.  Well, a shelter in Maricopa County, Arizona is holding a “pit-in,” hoping to get adoptions for dogs that can be difficult to home.

Melissa Gable is the one hosting the pit-in.  Gable and her boss, shelter director Valerie Beckett, came up with the idea to have Melissa, starting with adorable pit bull Lizzy, hold these special events to raise adoption awareness, but also try to get homes for these dogs.  Many of them are pit bulls, some with checkered pasts, and finding forever homes can sometimes be different.

“These are the dogs that literally no one wants, and how do we market that?” said Gable.  “I thought of a sit-in and I’m like, I’m gonna have a ‘pit-in’ and told my boss my plan that I wanted to pitch a tent in the play yard and sleep there until Lizzy got adopted.”

Beckett wasn’t sure where the idea came from, or how she thought of it, but she was impressed, and on board with the plan almost right away.

They plan to keep people updated on Lizzy, and any of the other dogs available as well, through their Facebook page.  Hopefully, some of the more difficult to adopt dogs will finally find that loving forever home that they deserve so much.