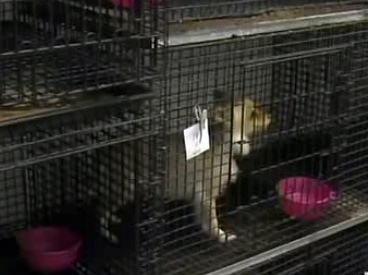 The dogs auctioned come from puppy mills, where dogs spend their lives in cages making puppies to be sold to brokers in pet shops. Those breeding dogs often come from other auctions where dogs are sold to anyone who will pay. Some do not sell. Dogs without buyers are often killed.

And dogs are big business in Ohio. A local breeder sees recent protests as a threat to his way of life. “We don’t want to mistreat animals. We want to use them with respect. If everything is condemned, we ain’t going to have any.” He fears a ban on auctions would burden Ohio farmers.

One rescue group bought five of the dogs at the auction and immediately took them to a veterinarian for exams. The vet found bad teeth, two had serious ear inflections, one had splayed feet and toes from a life spent standing on cage wire, and one had its voice box removed.

Only five other states have more licensed breeders than Ohio, and that number is dwindling as other states toughen animal laws.