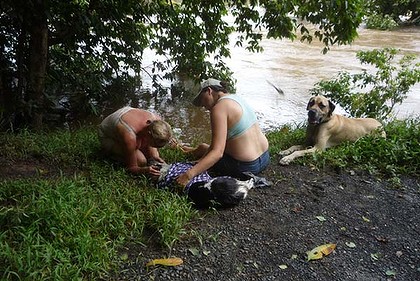 Australian Petra Lovey is being hailed as a hero after rescuing a stranger’s dog from raging floodwaters in the Barron River. Jerzey, a Boder Collie cross,  chased a stick into the current and was swept under a bridge when Lovey saw him and sprang into action, pulling the dog from the river and reviving him by administering CPR. Lovey describes the ordeal in an interview with cairns.com

“The last thing I saw were her eyes looking at me as she was swept under the old wooden bridge,” Ms Lovey said. “The Barron River flows like a torrent so it didn’t take much for her to be sucked under the bridge.”

Clare Hensley, who was walking Jerzy, feared the worst but Ms Lovey was determined to save the dog.

“Jerzy was fighting it – she was completely submerged and she would have been submerged for about two minutes,” Ms Lovey said. “I knew she would come through the other side but it was a matter of trying to spot her as she came through.  I saw a little speck of black in the water so I jumped in, everyone was screaming out to me that she was gone, but I wasn’t going to give up. Somehow I found her body and grabbed her.”

Jerzy was lifeless when Ms Lovey and Ms Hensley got her out of the water.

“Clare started to perform CPR but was unsure how to do it properly on a dog so I took over,” Ms Lovey said. “Jerzy was flat – she was gone. But after a few compressions somehow there were signs of life.”

Ms Lovey said she had experience in caring for animals but had never had to react so urgently. “I used to be a zookeeper and I have worked many years in veterinary clinics, so I knew what I had to do, but this is the first time that I have had to perform resuscitation ever. I have never had to use CPR on a human and now I have brought a dog back to life. I wasn’t going to give up – I didn’t even think twice about giving her mouth to mouth. I treated her like a child and you wouldn’t give up on a child so I wasn’t going to give up on Jerzy.” 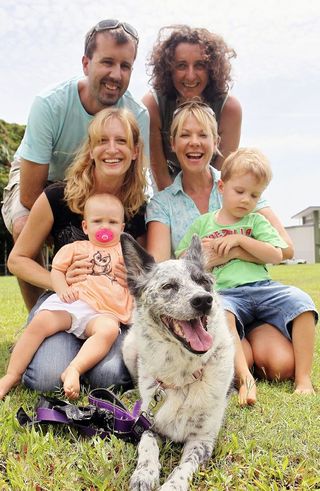 Jerzy’s owner April Hahne, her husband Scott and their two young children had been visiting family in the area and headed home yesterday morning with a sore and sorry dog. Mrs Hahne said she took Jerzy to the vet on Sunday afternoon where he stayed for three nights.

There were tears of happiness when Mrs Hahne thanked her hero personally yesterday. “Jerzy is my first baby. She just isn’t a dog – she is very much part of our family and I am so thankful for Petra and Clare for saving her.”

7 thoughts on “Aussie Dog Rescued from Floodwaters, Revived by CPR”