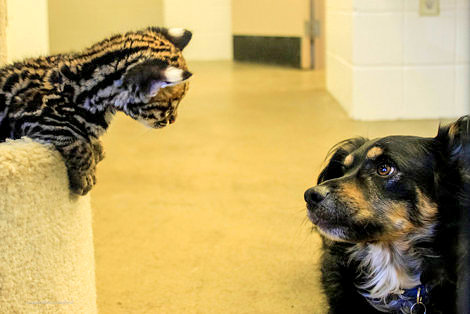 Earlier today we brought you a video of a dog that serves as a playmate for an ocelot kitten at the Cincinnati Zoo. Well, not only is Blakely a playmate, but a surrogate mom, nanny and a role model for a number of baby animals, including a skunk and a warthog.

Two years ago, keepers at the zoo nursery decided they wanted a dog to help them raise their parentless baby animals, and decided on an Australian shepherd, known for being highly intelligent and easy-going. Dogs had been paired with young cheetahs for 30 years as part of their Cat Ambassador program, which introduces well-trained big cats to the public and educates people on endangered species.

“We don’t pull animals from their moms unless there is a problem,” said keeper Michelle Smith. “If they are doing well, we leave them be.”

The main issue is that newborns aren’t getting enough nourishment. It can be trying for zookeepers to teach them how to suckle from a bottle, but Blakely has his own technique: He drinks milk from a bowl and lets the babies suck it off the fur around his mouth.

Blakely was adopted by the zoo from a rescue group when he was eight months old. For six weeks he lived with a foster family who had a therapy dog, and before long, Blakely breezed through a series of temperament and personality tests. 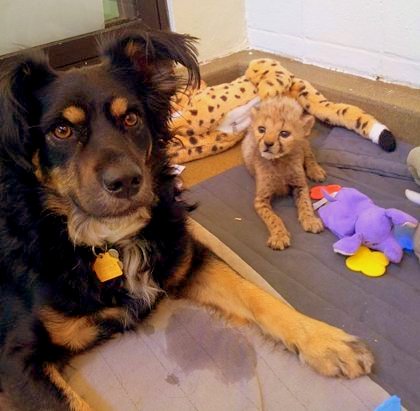 His first charge was Savanna, a cheetah cub. Her brother died and their mother would no longer care for her. Though at 18 months he could be quite unruly, Blakely would instinctively lie down and allow the cub to trample upon him. If she needed comfort, he would gingerly snuggle with her. After Savanna, the shepherd helped raise a bat-eared fox, a warthog, a skunk and a wallaby. His most recent ward was Santos, a sprightly ocelot kitten who recently graduated from the nursery to become a Cat Ambassador.

In addition to affection and comfort, Blakely helps animals develop by roughhousing with them. Keepers do not want to tussle with animals using their hands, because as adults they could inflict serious damage even just through play. Blakely can handle his adoptees, but on the occasions when he’s had enough, He will nudge them or walk away.

“He’s always good at reading their boundaries,” Smith explained. “He teaches the babies the right way to play pretty fast.”

When he’s not taking care of baby animals, Blakely naps on his couch and gets walked around the zoo, lighting up when he sees children.

“He loves kids,” Smith said. “He has the biggest tail wag when he sees children.”

When Smith was asked to describe Blakely’s role at the zoo, she said: