Your big party during the big game could be dangerous to your pet. The Association for Pet Obesity Prevention (APOP) offers tips to pet owners to make sure their Super Sunday party activities don’t end up causing an overtime veterinary emergency. 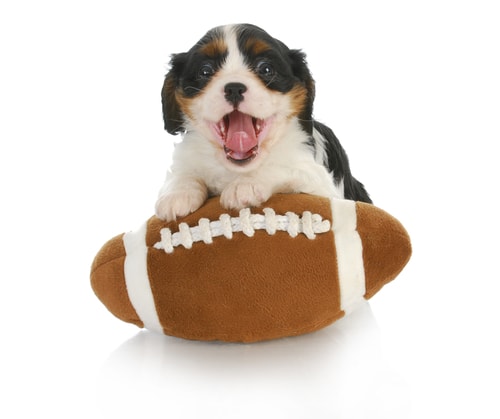 Sunday’s big game now trails only Thanksgiving in terms of US food consumption. This enormous engorgement not only threatens many weight loss resolutions, it also may add unhealthy pounds and dangers to our dogs and cats. Sharing a few nibbles of healthy snacks such as celery or carrots is fine, pizza and wings are not.

“When we look at weight gain in humans and pets, big single-day caloric consumption can have life-long consequences,” notes Dr. Ernie Ward, founder and president of APOP. “A pet can be fed a healthy, low-calorie diet and have their efforts erased with a huge feast.”

Ward points out several foods to avoid feeding your pet on Super Sunday. “Don’t feed your pet anything fried or battered, covered in creamy sauces and steer clear of salty snacks.” In fact, Ward recommends limiting any super snacks to “crunchy vegetables such as broccoli, baby carrots, celery and asparagus.” According to Ward, each chicken wing has about 55 calories. A 20-pound dog fed a single chicken wing is similar to an average adult eating almost seven wings. Feed a 40-pound dog one-half slice of pepperoni pizza and that’s the same as an adult consuming two slices of pepperoni pizza and a 12-ounce cola.

It’s not just the calories that worry Ward. “Americans will eat about 1.25 billion chicken wings during the game. That equals 1.25 billion chances for a dog or cat to ingest a bone that can cause serious complications.” APOP warns pet owners not to feed their pets chicken wings due to the risk of intestinal obstruction or worse.

“An often overlooked risk of chicken wings is salt,” states Ward. “One buffalo wing has almost about 160 to 200 mg of sodium. That’s about the amount of sodium recommended for a 20-pound dog in a day. Feeding a dog too much salt can cause high blood pressure and can contribute to kidney and heart disease.” Other foods high in salt that should not be fed to pets include pizza, hamburgers and cheeseburgers, fries, pretzels, potato chips, canned beef stew, potato salad and many sauces.

“Chicken wing bones and salt are not the only potential dangers a pet may face during the big game,” adds University of Tennessee College of Veterinary Medicine veterinary nutritionist and internal medicine specialist Dr. Joe Bartges. “Foods such as chocolate, raisins, macadamia nuts, and foods containing Xylitol may be toxic. Eating foods high in fat not only increases calorie intake, but may cause problems such as vomiting and diarrhea or life-threatening pancreatitis.”

Alcohol is another potential danger for pets. Dogs and cats are extremely sensitive to alcoholic beverages and will often drink from half-empty cups and bottles and become ill. As little as a few ounces of beer or wine can prove toxic to a dog or cat. APOP recommends never leaving alcoholic beverages unattended and discard any containers as soon as you’re done.

One final Sunday football danger Ward warns about – stress. “You may have friends and family over, rooting for your favorite team with lots of loud noises and high-fiving. All of this may prove especially stressful for the four-legged family members that have little interest in the big game. If you notice your dog or cat cowering or pacing, provide a quiet, safe space for them to relax away from the action. Otherwise, you may be awakened early Monday morning by unwelcome stress-related diarrhea.”