When a passerby in Baltimore, Maryland heard moaning sounds coming from a dumpster, they had no idea what they might find inside.  Much to their surprise, it was a badly abused dog.  BARCS (Baltimore Animal Rescue & Care Shelter) responded to the call, and the dog was rushed to the Essex Middle River Veterinary Center.

Vets determined that the one-year-old pit bull had been mistreated, starved down to 30 pounds and dragged behind a vehicle.  Swaths of skin were scraped away, leaving bone exposed.  Upon taking an X-rays, doctors found something even more shocking:

“We did X-rays when he first got here and he had just a bunch of foreign material in his stomach –  money, metal objects and other things we saw,” said Dr. Matthew Jones.  “I personally have never seen something that severe as far as whatever happened to him prior to finding him in the dumpster.”

Because of the black spots on his ears, the injured dog was named Freckles.  Jennifer Smith, president of Noah’s Arks Rescue in South Carolina, volunteered to take over his care.  The group is currently accepting donations to help cover Freckles’ mounting medical bills.

Efforts are being made to locate Freckles’ former owner and to bring them to justice, but loopholes in South Carolina’s dog laws make prosecution difficult.

“It’s extraordinarily frustrating,” lamented Kim Kelly, director of the Humane Society of South Carolina  “It’s very difficult to know that someone is abusing animals and not just one or ten animals but hundreds of animals and not be able to get a conviction.  The more time passes, the more animals suffer.” 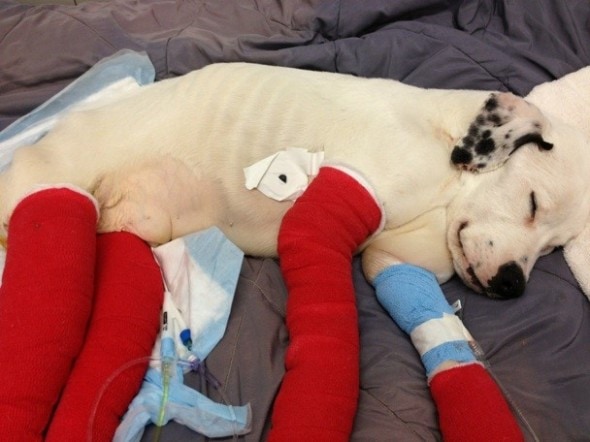 While the person responsible for executing such a heinous act against a living creature may unfortunately never be apprehended, there is good news:  Freckles has made a remarkable recovery, and Noah’s Arks will be there for him every step of the way.  Smith said that he may have to lose a leg, but they are using a VAC negative pressure would care system to give him the best chance possible, and his vitals have remained stable.  In addition to gobbling up treats and putting on weight, he is also trying to “talk” again.

“Our little boy is close to one year old and has the best fighting spirit,” said Noah’s Arks.  “He is here today because he wants to be here.  What he has endured, very few animals could have.  We are hoping and praying his young age will be in his favor and allow his body to fight off everything that is being thrown at it.  I know a lot of you are saying we should put him down.  I will tell you the same thing I tell everyone else, as long as an animal is fighting to be here, I will fight alongside him and do whatever it takes to make him comfortable and to thrive.”

That is exactly what Freckles is doing.  He will be available for adoption as soon as he’s healed.   If you would like to contribute to Freckles’ care, please visit:  http://www.noahs-arks.net/RESCUE/HOME.html