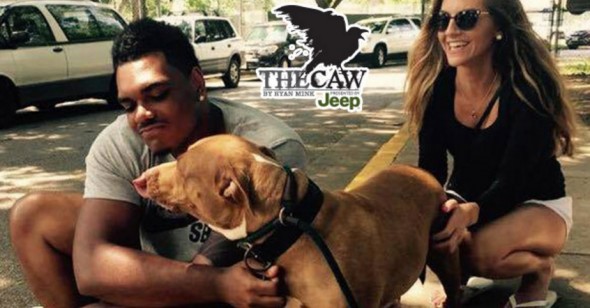 Ravens’ rookie Ronnie Stanley went into the BARCS animal shelter, and did something amazing.  He was looking for a dog to adopt, but had some special criteria that the dog must fit.  He specifically wanted to adopt a dog that no one wanted, and had been at the shelter the longest.   So he brought home a discarded, overbred mama!

“Ronnie Stanley visited BARCS in search of adding a pup to his family.  He was accompanied to our shelter by his girlfriend, along with his teammate, Alexander Lewis (#72).  When they checked into our front desk, they let us know just what they were looking for, and for a superstar like Ronnie, you’ll never guess what requested.

’We are looking for dog that’s been here a long time and maybe not-so-adoptable,’ Stanley said.

Our matchmakers were delighted.  “Not-so-adoptable” can mean a lot of things here…senior pets, physically imperfect, on-going medical and more.

Our BARCS staff showed Ronnie and his girlfriend a few pets that fit his (seriously awesome) criteria. Winter was the lucky dog that caught Ronnie’s eye. 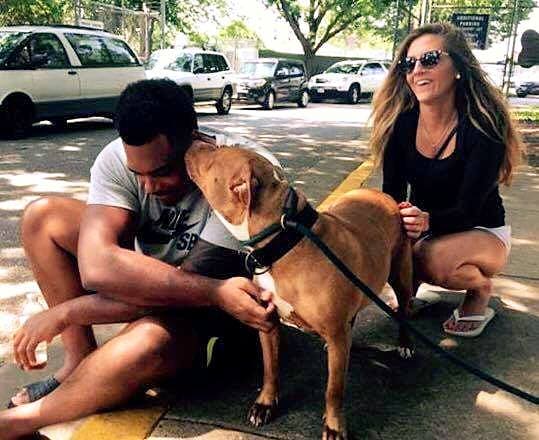 Beautiful Winter is a dog who has spent most of her six years of life falling into sad, unfortunate situations.  She was found on a vacant property, on a hot day with no electricity, or open windows.  She was dehydrated and extremely frightened.  Winter has a long, hanging belly, mostly likely a result of over breeding; something we see far too often at our shelter.  Due to her age, her belly is not something that will ever tighten up.  Female dogs with such characteristics are often passed by in our shelter, but not by Ronnie!”

Ronnie’s thought on Winter’s belly, as recalled by our volunteers: ‘Well, that’s just what happens when you’ve had babies.’ He was much more interested in getting lots of face kisses from Winter and falling in love rather than being worried about the appearance of her tummy.  What a great guy!

It was a done deal.  Ronnie and his girlfriend signed Winter’s adoption papers and took her to her new home the same day.  Once a discarded pup, now the doggy-daughter to a Raven.

We are so proud to have amazing guys like Ronnie to be role models to the kids in our city.  Not only does his single act of kindness make adoption cool, but it makes giving love to an imperfectly perfect dog a ‘manly’ thing to do.”