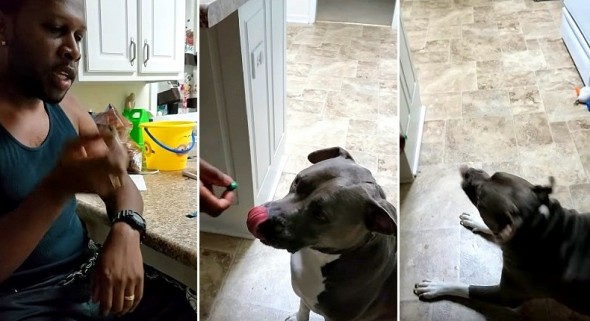 No one likes a beggar.  But our pets are just so cute when they do it.  And they beg for things that we know they shouldn’t have, but sometimes we have to give in so they’ll realize that what they’re asking for isn’t what they want at all.  Check out this dog’s hilarious reaction to being given a not so sweet treat.

Though we would never wish them harm or true hardship, sometimes we have to just let our pets and kids learn things the hard way.  I had a German shepherd growing up that would constantly sniff around the stove when we cooked.  We warned him to get away from it, but one day when someone opened the hot oven he rushed over and burnt his poor schnoz on the inside of the door.  We hoped that wouldn’t happen, but he did learn to keep away from it after that.  And so it goes.

KC Martin’s adorable pit bull was begging for some Halloween candy, and after getting fed up with the pleading eyes and drooling (as evidenced by the puddle on the floor), he pulled a little prank on him and let him lick a sourball.  Now we know that copious quantities of citrus isn’t good for dogs, and some can vomit or have diarrhea from it, but a lick or two isn’t going to kill them.

The dog’s reaction – and his dad’s – is as expected:  funny and cute, and exactly what makes life with dogs so fantastic.  It’s easy to see how this video has gone viral on Facebook and YouTube in only a few short days.  “One more lick for the road, buddy?”  Nah, he’s good!