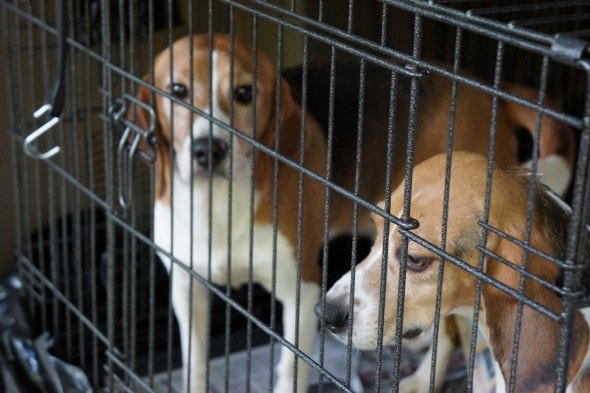 On Monday seven beagles had a nice afternoon enjoying the sunshine and outdoors. Even though they are four-years-old, it was the first time they’d ever experienced it. The beagles were rescued by the Beagle Freedom Project from a laboratory in Virginia where they had spent their lives as test subjects.

Of the 1.1 million animals used as research subjects in the United States, 65,000 of them are dogs according to the most recent U.S. Department of Agriculture report on animal testing. Of those 65,000 dogs, most are beagles.

“This is the industry’s dirty little secret…They don’t want people to know dogs are being tested, period,” said Shannon Keith, founder and president of the Beagle Freedom Project.

Most dogs are usually killed when they are no longer used by the lab. The Beagle Freedom Project has been working to persuade labs to give the dogs to foster families instead. Families from as far away as New Hampshire came to foster the seven beagles released from the Virginia lab. All families were interviewed to make sure they were fit to care for these beagles.

The Beagle Freedom project will cover the cost of their veterinary care, food and other supplies during their two to eight month period of being fostered. Then the dogs will be adopted by their foster family or another permanent family.

While many dogs coming out of a lab are fearful or rambunctious, these dogs were instantly friendly. One even let his new foster cradle him like a baby.

“They’re really craving that human touch and that love,” said Gail Thomssen, who is fostering one of the beagles.

For more information on the Beagle Freedom Project and how you can help visit their website.