These bears know how to get Labor Day Weekend started right!

A mama and her two cubs did a bit of high school-style pool hopping around a Pasadena, CA, neighborhood this past Thursday, delighting those who enjoyed the news-cam footage (though the owners of the home with the broken sliding-glass door were likely less-than-enthused!)

Despite the obvious dangers — for both bear and man — of having these animals roaming the suburbs, it’s hard not to delight in anthropomorphizing the animals. The family looks entirely human, with mom enjoying the cool waters as her playful twin siblings splash and roughhouse in the shallow end! 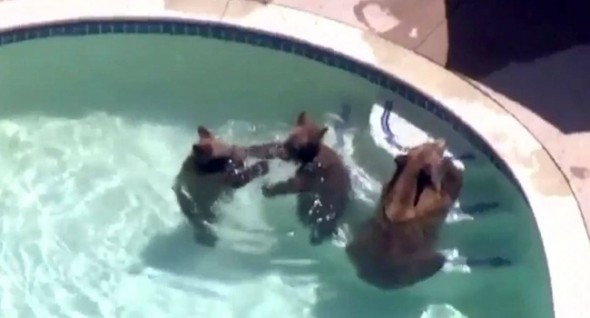 Their jaunt around the area, however, was cut short by one brave pup who decided the neighborhood wasn’t suitable for bear-related antics, running them off from a dumpster where they had stopped for an afternoon snack.

“It’s not unusual at all to see bear activity,” Andrew Hughan, a spokesman for the California Department of Fish and Wildlife, told KTLA. “But it’s unusual to have them in the pool.”

Hughan estimated the mother bear weighed about 300 pounds. Her cubs, believed to be less than a year old, appeared “pretty darn healthy.”

It was reported that the trio eventually made their way back to the forest, no worse for the wear.