At Elk House Farm in Sechelt, British Columbia, Canada recently, their doggy “security guard” got quite a scare.  A very large Canadian grizzly bear wandered onto the property to snack on some delicious fruit, and just walked straight past the dog on the property.  The dog did try to get the bear to leave, but was unsuccessful at best.

The clip of the bear and the dog is making it way around the internet.  In it you can see a bear eating some fruit from what looks like a tree branch that it knocked down.  One of the dogs on the farm tries to go over to the bear and bark at it, but the bear is totally unimpressed. 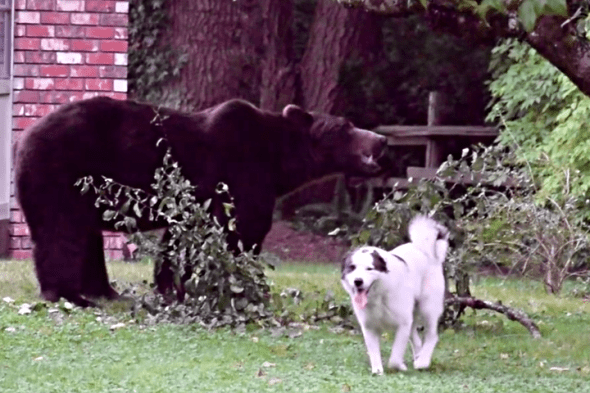 Canadian officials want to remind everyone that with the warmer days behind us, there are going to be more and more bear sightings.  They also can become more aggressive when looking for food.  The Conservation Officer Service released the following on their Facebook page:

“Although grizzly sightings are uncommon in Sechelt, Sunshine Coast CO’s have confirmed the presence of a grizzly bear in the area.  To date, the bear has not displayed any aggressive behavior to people. Conservation Officers have set live traps in the area in an effort to prevent conflicts with the bear.”

Please, be sure that you’re taking every precaution with your pets when it comes to interactions with wildlife.  Especially if you live in northern or colder climates, where many animals will be looking to get to as much food as possible before winter hits. 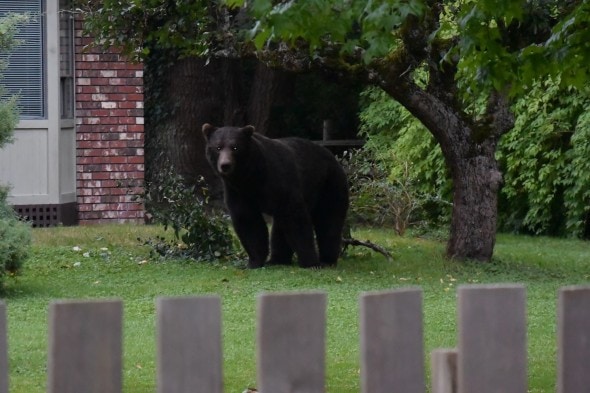