The tale of Honey (and Buddy!), by Warren Andrew Chang. 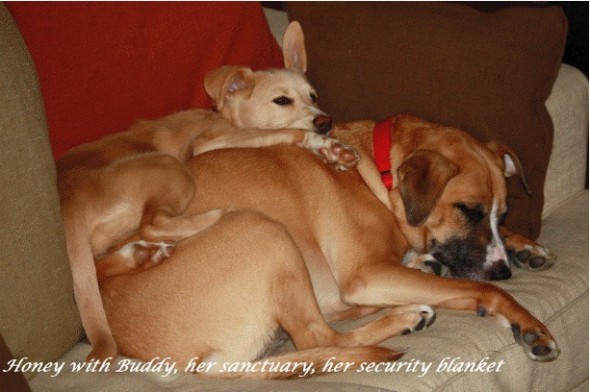 It was early 2011, when winter was still in the air in Wise County in Virginia, when Honey was found. A friend had made her way to work like any other cold winter’s day. That morning, however, as she rushed from her car to the office, she stopped. Something was different; something disturbed the cold crisp winter morning air. From the garbage bin outside her office, came this rustling noise which startled her, yet aroused her curiosity. Venturing to take a look, she found a black garbage bag all tied up with something squirming inside. Fear, but more than that, her curiosity, made her reach and open the garbage bag and in it she found a little puppy, shivering, cold and most of all afraid. Someone had abandoned this little puppy in such a heartless manner, discarded like trash and in all reality assumed that the cold winter would finish off the task that he started when he tied the knot on that bag. But faith always throws a curved ball every now and then, and this was one of those times. 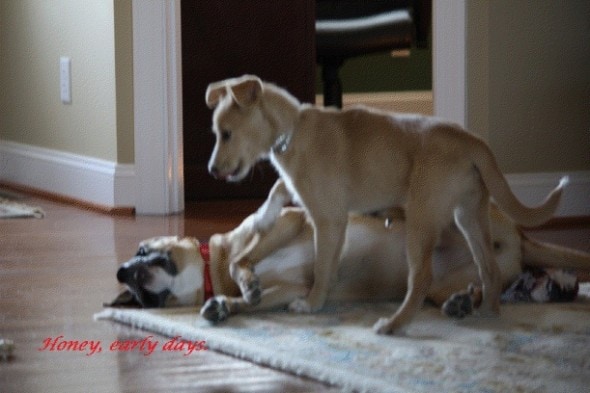 She took the little shivering pup in and looked after it the best she could. She named her Honey, for the color of her fur was like that of honey in the sunlight. Honey spent several weeks at the office, but time was running out to find her a decent home. That’s when Honey came into my life. My girlfriend suggested I see if Honey would be good company for my other rescued dog, Buddy. It wasn’t easy at first, and I almost gave up trying to adopt her, as my life was already so complicated and the last thing I needed was an unfriendly dog. You see, I had gotten Buddy several months earlier. He was found by my girlfriend, running down the middle of the road one rainy evening with cars swerving around to miss hitting him. She could not leave him out there in the rain and brought him back home. I took Buddy in and his owners never could be traced and it wasn’t until his seizures began that I realized why he was probably let go. His seizures were bad, and several trips to the vet’s office, including a vet neurologist, led to the diagnosis of uncontrolled epilepsy. It was a frustrating time for me; I knew I could not leave Buddy at the animal shelter, as without treatment his seizures would kill him if he was not put to sleep before that. So I kept Buddy and dealt with his seizures as best as I could. It was not easy, as when he had his seizures, he lost control of his bodily functions, and following his seizures he would go blind for several minutes, a “postictal” phase, as it’s called. During that time he would run into things and was at high risk of injuring himself, so I had to be by his side every minute til he returned to normal. His seizures occurred every 7- 10 days and he would have 5-6 cluster seizures. Fortunately, after multiple visits to the vet and then eventually taking him to Virginia Tech to see the neurologist. His seizures have improved with all of the 20 pills that he has to take a day. However, that in itself is another story. 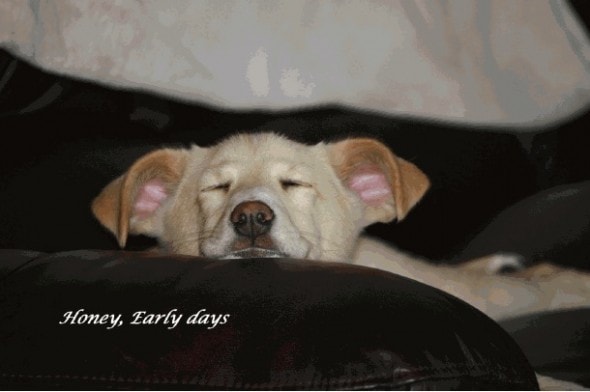 It was during this time, when he was having seizures really bad, Honey needed a new home and thinking that it might help Buddy, she came back with me. From the onset, it was obvious that whoever mistreated her was a man. Honey would go to any woman, but never to a man. She always kept a safe distance from any male. At first, I did not worry too much about this, as I felt she would get used to me like dogs always do when they settle in a new home. But I was so wrong. I could never get Honey to come to me. No matter how much I coaxed her, she always stayed away from me and when I would try to pet her she would always position herself such that Buddy was always between her and me, like a barrier in case I should try to do anything to her. I tried and tried for several weeks, and my patience was running its end. I felt I would have to return her; I did not see any hope of her being friendly. No matter what I did, she would never come to me. Since she was still being potty trained, I used to keep her in her crate during the day, and when I returned from work and opened her crate, she would not come out til I disappeared from the scene, and even then she would creep out and run straight to the bedroom to hide. Even meal times were tedious, because she would not eat the food I left out for her til I was out of sight, and then she would cautiously make her way to her dish.  She often had one eye on her food and one eye looking around for any signs of danger.  Buddy, oblivious to everything else, chomped his food down. 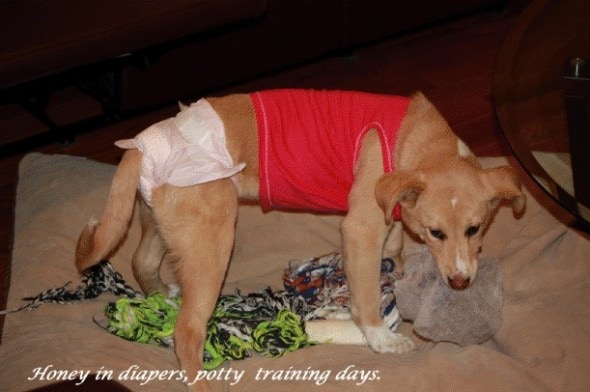 I realized certain things scared her more than anything else. Sudden movements, loud noises and above all else, anything that was big and black. When I took the trash out, I used black trash bags and she would scurry away like the wind when she saw me carry a black trash bag. I guess her fear was that she was going to end up in one every time she saw me carry it, so much so that I had to start buying the white trash bags which still scared her, but not as much. I realized that she had post traumatic stress, and little things would trigger a wave of panic in her. A black garbage bag meant fear untold. Any sudden movements, any loud noises made her jump out of her skin. So I had to be very gentle and soft around her. One day, I was taking her out on the leash and accidentally dropped the handle. The banging of the leash on the floor startled her and she took off running in fear, with the leash banging the ground behind her, which scared her even more. I ran after her, and finally caught up with her only because she was trembling, shaking like a leaf, having messed all over herself from fear. It was heartbreaking to see her so afraid, so helpless. She would just seem to stand stationary in a single spot forever without moving.  It was as if her fear was so heavy it rooted her to the floor. I would go about my chores and come back 30 minutes later to find her standing in the same spot, salivating from fear. I tried to be patient with her, tried to give her more attention and love. A lot of hugs and kisses but I could not get her to be comfortable in my presence. She was always wary, always guarded and always kept Buddy as a buffer between her and me. At times, I felt it was not working and I had to find her another home. So I literally withdrew and let her be on her own. It was just a matter of time before I took her back. But as we know life does throw a curved ball every now and then, and again, this was another one of those times. As I let her be, as I stopped fussing over her, she slowly started sitting in the same room with me. Not on the same couch with Buddy and me, but at least in the same room. When I left for work in the morning, she would make her way to her crate and I didn’t have to go looking for her and carry her to her crate with her tail between her legs and shaking like a leaf. It was almost 6 months before she first licked me in the face, her sign that she was getting comfortable with me. It was a lot longer before she first rolled on her back and let me stroke her belly. I never imagined what a thrill that was, it was like a parent seeing their child take its first steps. 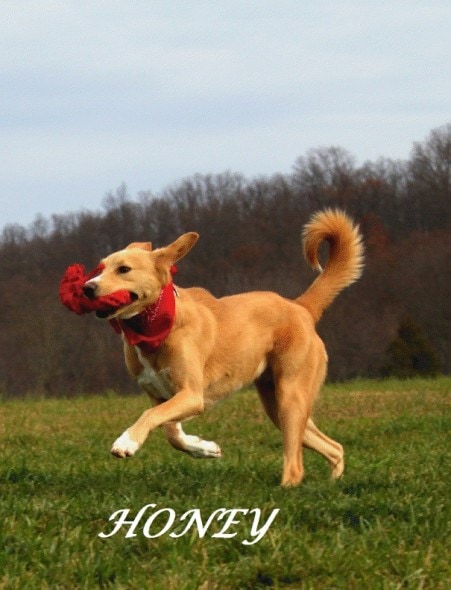 We have come a long way since then, Honey and me. She is still cautious but when I come home now, her unconditional love bursts through and she is leaping around, her tail wagging at a 100 mph. It’s pure joy being expressed. Honey is now so well-behaved, and is the smartest dog I have ever had. Her talent for learning new tricks is amazing.  The only trick I have not been able to get her to do is roll over or anything to do which involves her on her back…it still scares the heebee-jeebees out of her. She is as swift as the wind and deft as a wide receiver. When she is out in the open she races like the wind, carefree, unlike the very first time she came home, too scared to even move. She shares her love and affection unabashed, unconditionally. To think that had I not waited, I would have missed out on all the love this wonderful dog has brought to my life.

It breaks my heart every time I pass a garbage bin, to think and wonder how many more “Honeys” ended up that way and probably were never lucky enough to be found. It also makes me wonder how much more evil exists that tries to snuff the life of a helpless puppy.

At difficult times in my life, I think about moments I’ve been so close to giving up, and then I think about Honey. I almost gave up on her, and would never have known her simple unadulterated love, and so I keep going because I know change is just around the corner.

I love you Honey, and you’re one garbage item I would never trade for a million bucks. 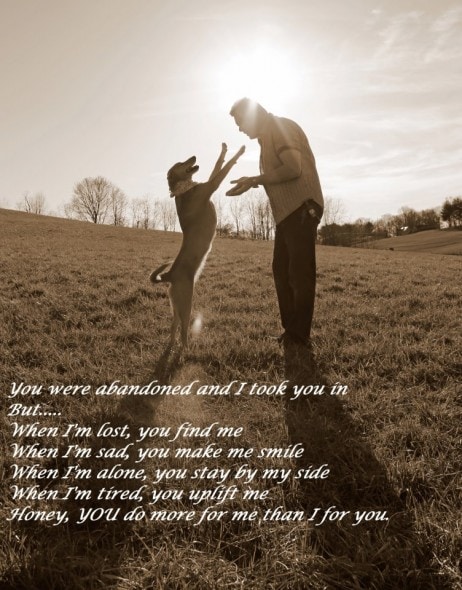