Reprinted by permission of Stubbydog.org

It was plain and simple – I was a cat person. I had two cats and had fostered more 50 (but had never adopted, as I was strong in my conviction that each one adopted meant a space for one more!). 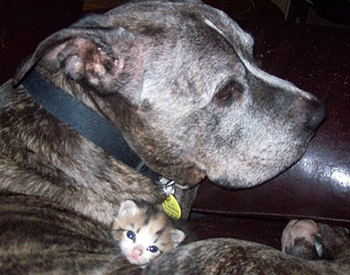 As an adult, having a dog had never crossed my mind. Dogs were nice, sure. I didn’t fear them, and I enjoyed being near them. But the thought of enduring smelly wet fur and their need for exercise even in bad weather didn’t interest me one bit. I didn’t want to even think about having to schedule my time around a dog’s bladder capacity!

His owners never came forward. And, except to visit, he never went back to the shelter.

But when I started working at our local animal shelter, I was bitten not by a dog, but by the love of dogs. My husband and I had caught the bug, and we began to foster as many as we could.

I took dogs home from work with me every night, learning as much about them as I could so that I’d be better equipped to help potential adopters meet their match. I didn’t think of actually adopting a dog, however, until I met “The Governor.” I still remember clearly how he looked that day as he lay in the kennel of the stray area after animal control had picked him up alongside the highway. The image is still vivid now, almost a year later.

Suffice to say, he didn’t stay there long. He wasn’t one of our usual guests; my husband and I would generally take home long-term, high-energy, young dogs that needed a break from the shelter before we could learn what they were really like. But “The Governor” was old and gray, unneutered and not even ours yet, as he came home with us before the time to reclaim him had passed. Surely his owners would come forward. A stately gentleman such as he deserved better accommodations than a concrete kennel while he awaited them.

His owners never came forward. And, except to visit, he never went back to the shelter.

When people heard he was a pit bull and saw his bulky frame, many were terrified – until they saw him move. His graying muzzle wasn’t the only thing that identified him as an elderly and non-threatening soul: The fact that he didn’t have many teeth helped too.

He became “Daddy,” not after the famous pit of that name on TV, but due to his behavior the first time his new home was invaded with orphaned kittens. I will never forget watching him calmly resting on our bed with these tiny felines crawling on his back, sprawling on his nose and chewing on his ears, as another foster dog came into the room, eager to play with – or eat – the little creatures. Daddy never even lifted his face from the comforter, but his lips quivered, showing his teeth, and his low growl sent the other dog quickly out of the room.

Daddy’s fathering skills came in handy on several occasions. When my pregnant foster pit bull had eight beautiful pups, my husband and I brought home babies to bottle feed. We placed them on the floor of the living room, and Daddy would clean, keep warm, carry, and keep them safe from our pesky puppy Cavil!

The old man could barely walk some days, but he could sure swim! Our property is on the ocean, and while he struggled with his age getting there, once we hit the shore he forgot his creaky joints and sore hips almost completely. He would plow into the water like a pup – such a beautiful sight!

Daddy loved the car and often travelled with us. His age and slow pace, his low energy and his way of putting other dogs at ease made him a welcome guest in canine-friendly homes. He attended board meetings with me and went to work with my husband too from time to time. At outdoor events, he was always in tow; he especially loved a barbecue, for obvious reasons. He was also a great addition to presentations for the shelter and another animal rescue with which I worked, teaching adults about prejudice and children about dog safety.

Another image that will always be with me is from a summer day camp: Our presentation was about to end, and while I told the kids that crowding a dog is never a good idea and can be very unsafe, this one time Daddy would be happy to say goodbye to them all at once. About 20 little bodies gathered around, patting and scratching, while Daddy just stood in the middle of it all, tail wagging and tongue licking the closest faces.

My favorite times of all with Daddy, though, were when he would haul his old body up onto the couch or bed and collapse with a sigh, resting his huge head in my lap or on my shoulder. I won’t forget his eyes.

The end came unexpectedly. A new medication had him practically prancing, and he had several delightful days of swimming and fun at the end of that summer. Then one day he woke up like his old self again, slow and wobbly. On our way home from the water after his last swim, he lay down and never got back up. He could no longer walk or stand.

I’d watched “Marley and Me” many months before, alone with Daddy. And when the lead character asked the old dog in the movie an important question, I asked Daddy for the same favor through my sobs – to let me know when it was time. That day, I asked him again. And he told me it was.

It was the holiday weekend, and our vet was away for the weekend. I was so thankful that Daddy didn’t seem to be in any pain. He was still eating, drinking and going to the bathroom, so we spent our last days with him spoiling him rotten and carrying him onto the lawn to enjoy the beautiful weather. Another image that I am so blessed to have caught on camera: Our puppy, who was not so much a puppy any more, had been a pest to Daddy every day since he was born, but when Daddy took his downturn, Cavil’s behavior changed. He became attentive and kind. He brought things to Daddy’s blanket on the floor and lay down with him. On Daddy’s last full day on the earth, Cavil joined him on the lawn in the sunshine. (photo below)

The final image that I will remember always is of Daddy when I said goodbye. The vet and the staff were so caring and respectful. They knew him, and they knew me. If it hadn’t been so horrendously heartbreaking, I would have called it beautiful. The way he was just there, and then he was gone. Not even a sigh. The way the vet laid her forehead against his soft fur for a long moment. The way he was still warm when I kissed him – before I stood and left his shell behind.

5 thoughts on “Becoming a Dog Person”