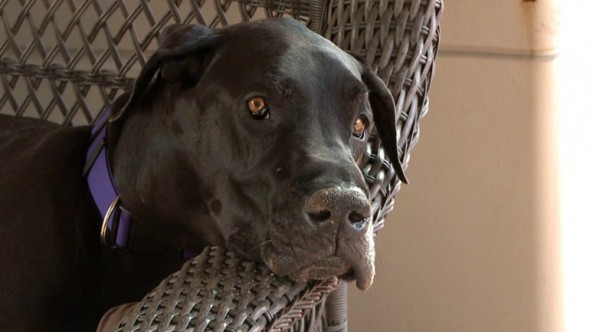 Bentley is one big dog.  We mean a really,really big dog.  Standing at 38 inches tall, weighing in at 228 pounds and packing in over 110 pounds of food a month, Bentley might just be a world record holder for biggest dog!

Bentley’s humans, Bob Magliocchi and family, have lived in Throop, Pennsylvania for as long as anyone can remember.  They have always had Great Danes, and not many Great Danes are known for being small.many people simply cannot help themselves when they see Bentley for the first time.

“You see a lot of people taking their phones out, or ‘Is that a dog? Is that a horse?'” said Magliocchi.

Magliocchi and his family are in the process of applying for the Guinness Book of World Records as the tallest living dog.  As far as they know from researching the topic, 38 inches tall is definitely a new record.

Not unlike many large dogs, Bentley doesn’t seem to know his own size.  He sometimes imagines he is more of a lap dog, and loves to cuddle.  Bentley is described as a true gentle giant.

“Bentley’s vets knew that he was going to be a big dog.  I knew that I was in for something big when they told me, ‘Try not to let him get over 240 pounds!'” said Magliocchi.

Bentley and his family should know before the end of the year if he has made the record book.  Bentley seems to be handling his new found fame in stride as well.  By all accounts, all the extra attention hasn’t turned him into a doggy diva.  He’s still the same old sweet, giant dog his family has come to know and love.