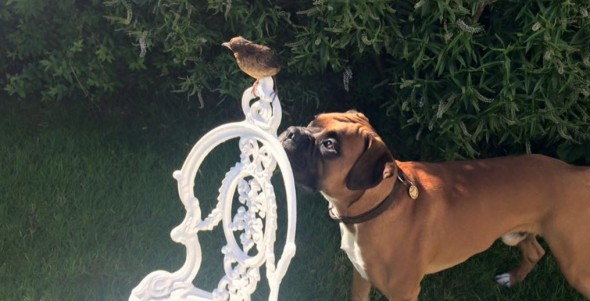 In Kent, England, lives Rusty the Gentle Giant.  Recently, he lived up to his name by rescuing and adopting a baby bird that fell out of its nest.  Rusty discovered the baby bird not far from his human’s woodworking shop, and it’s been a match made in heaven ever since.

According to Rusty’s human, Jurgita Peciulaityte, “I heard him barking excitedly, like he had found a cat, and discovered he was looking at this little bird which had fallen out of its nest.  As soon as I approached, the bird opened its beak so I found some earthworms which it gobbled down.”

Rusty and Jurgita have been taking several steps to keep the little thing alive and healthy.  They feed it and do the best they possibly can to teach the bird how to actually be a bird!  The baby even has its own specially made birdhouse indoors.

Jurgita says that even though the bird will allow her feed it, and will let her pick it up, it’s a much bigger fan of Rusty.  Maybe there’s a bit of imprinting going one here, but we can’t be sure.

“They’re very comfortable around each other,” she said.  “I’ll pick him up, but the bird always flies back to Rusty.  We practice going outside, perching up on different things and a bit more flying.  (I) Hope that Birdie will memorize the route to our porch and if he needs food after leaving he will find some in there, left special for him.”

To keep up with Birdie and Rusty, check out their Facebook page by clicking here.