Big Rosie was one of over 100 dogs rescued from a hoarding situation in Tennessee in July 2012. Five of these, including Big Rosie, were brought to Pet Refuge, in Mishawaka, Indiana. The hoarders had kept them in horrid conditions, practically living on top of one another, leading to significant health problems. 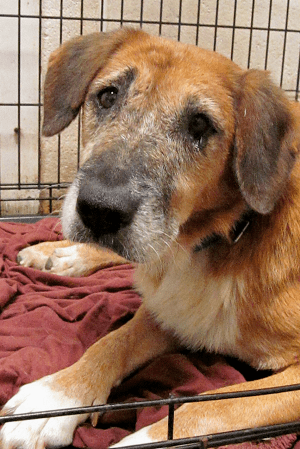 When the five dogs arrived at Pet Refuge, they were in such horrible condition that the staff knew it would be difficult to find homes for them. All had major health conditions, including heartworm.

For Big Rosie, these problems were compounded by her advanced age, giving her little likelihood of ever finding a forever home. It was also clear that she had a huge mammary tumor and major dental problems. They also discovered that she has significantly limited eyesight, with around 50% vision loss.

In addition, Big Rosie was very defensive and often hostile. One of the staff who worked with Big Rosie, Bonnie Richarson, knew she had a huge challenge on her hands.

“I can honestly say she…was one of the hardest dogs to try to work with in the beginning. I can only compare her to an alligator-whenever you tried to touch her, she just started snapping.”

The dogs that arrived had clearly had very little contact with humans and Pet Refuge staff all began to really worry about whether they would ever accept the love that staff members wanted to give them.

After a few months, it was time to get the dogs’ medical problems taken care of. Big Rosie was not really ready, but it was important to check if her tumor was cancerous and whether the teeth would need to be pulled. In the end, her tumor was surgically removed and she ended up with 20 teeth extracted. Everyone was also very relieved to learn that her tumor was benign!

After she began to heal and had been with Pet Refuge for about 5-6 months, Big Rosie suddenly began to blossom. She became more interested in the staff when they would come to her or take her outside. She almost never snapped at people either.

It seemed that Big Rosie was beginning to feel better and realized that people were not all bad. She even began to hang out with other dogs in the infirmary and just observe how they interacted with staff members.

Recently, Virginia, one of the dedicated Pet Refuge staff members who cleans out the dog homes and had helped care for Big Rosie from the beginning, asked to take her home and see what her reaction would be. After only a day with Big Rosie, Virginia asked to adopt her and give her a permanent home!

Big Rosie now lives with Virginia and her other two dogs and she loves to go on short walks outside. She continues to have her small quirks, such as choosing the bathroom as her place of comfort and insisting on keeping her doggy bed there. However, she is a true miracle and an example of the importance of dedicated, loving rescuers and, in the end, a forever home.