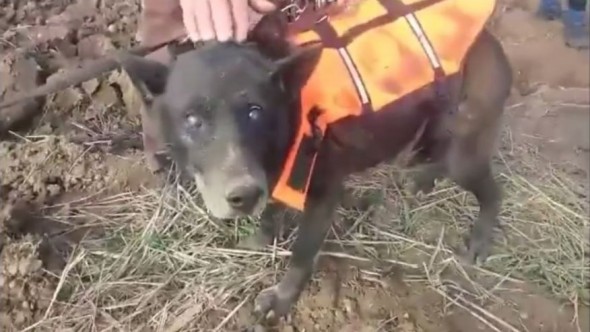 One could almost call this story The Kind Bosnians that Saved Christmas.  After spending a month stuck in a well in Bosnia, a dog called Christmas has been rescued, and thankfully was somehow in good health considering the situation.

The Great Animal Rescue Chase and Harmony Fund reported on their Facebook page that two kind people learned of the dog being stuck in the well, and acted quickly to rescue him.  They also posted the video of the rescue at the bottom of this article.  After getting the dog out of the well, they decided to call the dog Christmas.

“Surprisingly, the dog is in fairly good, physical condition,” said Laura Simpson.  Simpson is the founder of The Harmony Fund.  “The blindness of course is from a pre-existing condition, but he’s not in foster care and we’re hoping he can find a home where he’s loved and respected in the way he should be.”

According to the rescuers, the dog may have been searching out food in the area when he found himself falling into the well.  Some kids in the area were tossing food down to him for quite a while before they were told about it, and apparently no one else cared enough to rescue him.

The two men are named Fahrudin Caki Bravo and Ratko Koblar.  They worked together to get down into the well, so they could get him out carefully and safely.  It was Bravo that was lowered into the 28-foot deep well, and once out, Christmas seemed all too happy to have been rescued.

Blind Dog Saved from Well After 1 Month!HEROES SAVE “CHRISTMAS” THE BLIND DOG FROM A DEEP WELLBosnian rescuer Fahrudin Caki Bravo and his buddy Ratko Koblar drove for hours without stopping when they learned that a blind dog had been trapped in an open well for an entire month. The old dog had been searching a field for food and simply fell threw the earth. Children from the area had kept the dog alive by throwing food to the bottom of that deep, dark hole, but no one attempted to save the dog. No one until now.Watch the amazing rescue of “Christmas” as he is now named. This is one life-saving experience you won’t soon forgot.All year long, Harmony Fund sponsors the rescue and care of thousands and thousands of animals across the planet. Our massive fleet of heroes across the planet are saving animals hand-over-fist. This month alone, rescue work in Bosnia has already exceeded $5,000. We surely could use your donations to help. We’d love to deliver a special grant to help Fahrudin continue his rescue work and to help several others like him in Sarajevo and beyond.TO DONATE TO HELP OUR RESCUE WORK IN BOSNIA: http://harmonyfund.org/donate/amazing-animal-rescue-mission-bosniaThank you all for believing in us.