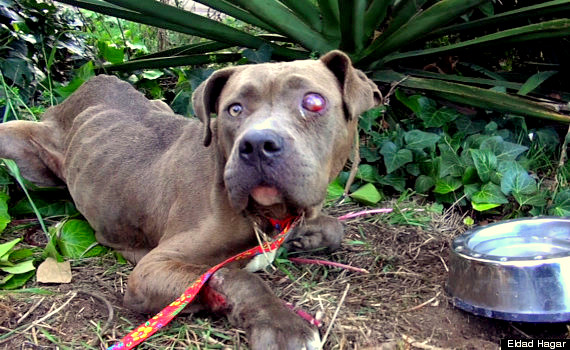 Savannah was in a bad way when Eldad Hagar found her:  she had been badly wounded in one eye and was slowly starving to death.  But Eldad took his time with the terrified girl, and how she’s recovered and ready for a forever home.

Eldad, co-founder of rescue organization Hope for Paws.  He and a team of helpers can be seen in the video below rescuing Savannah, a pit bull, from a Los Angeles park.

“People tend to abandon their animals [in the park],” Eldad said to The Huffington Post via email this week.  “It’s a pretty wild area, many coyotes are always around, and it’s just a horrible thing that people do thinking the dogs can somehow survive on their own.”

When Savannah was found, she was really in a bad way according to Eldad.  She was very thin and mal nourished, had several wounds, and one of her eyes was very badly injured. 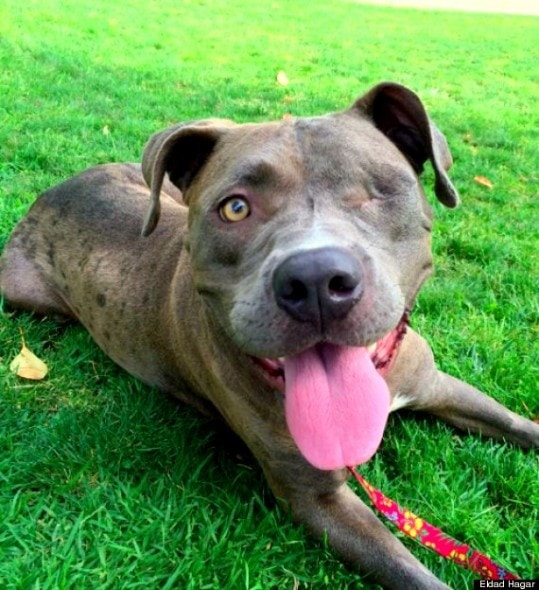 “Once I approached the bushes where she was hiding, I realized that she had no more fight in her. She was so hungry, so tired,” Hagar wrote. “The process of starvation is horrible. The body first breaks down all the fat for energy, then muscles, then internal organs… it’s a slow and very painful death.”

It was over a two hour ordeal to pull off the rescue, but Eldad finally managed to get the scared, injured pooch out from hiding.  She just jumped into his arms when she came out.

Savannah was immediately taken to vet and underwent emergency surgery.  Her left eye was removed and a large tumor had to be removed from her ear.  After the surgeries her “sweet spirit came alive,” according to Eldad.

For right now, Savannah is living with a foster family.  She is available, and would very much like to find a kind, loving forever home.  If you’d like more info on her, or to apply for adoption you can visit the Hope for Paws or Second Chance at Love websites.