Few things in this world are as painful as the sudden, unexpected loss of a pet. But what if you had a second chance at saying goodbye? An Alabama couple says that’s exactly what happened to them.

Michael and Rosie Reach say they will never forget two very specific and important days: the day Bo entered their lives, and the day they lost him. They rescued the St. Bernard/Golden Retriever mix  from an abusive home in the early 1990s and fell for him, naming him Beauregard, or Bo, his nickname of choice. He arrived broken: the huge, 130 pound dog would cower and run at the mere sight of a broom. Love and patience and time would heal those wounds, but then there was the… 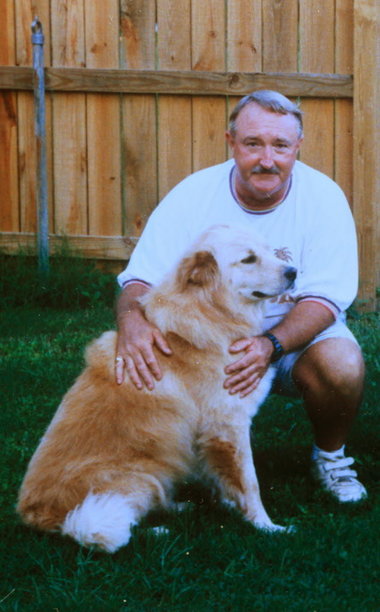 …separation anxiety. Left to his own means, Bo could be destructive. His list of ‘accomplishments’ included devouring a rocking chair. In an interview with Alabama Live Rosie said: “We talked about having to give him away. But he heard us!”

After overhearing that conversation, Rosie says Bo started to behave.

Because they had no children of their own, Michael said their pets are basically their children, a growing sentiment echoed by a growing segment of our national population – those choosing pets over parenting. The couple currently shares their rural home with two dogs and a number of cats, but despite the companionship, they say they have never stopped missing Bo.

Despite the challenges he provided, Michael and Rosie adored him. As he aged they nursed him through bouts of arthritis. They dressed him in boots to keep the cold from affecting him. They cared for him. And loved him.

And then he was gone. On Sept. 14, 2006 Beauregard followed Michael Reach as he walked to the mailbox. When Michael looked up, he saw Bo in the driveway behind him. “He just fell over,” Reach said.

Rosie was devastated when Michael called her at work to convey the news – so much so that a coworker drove her home. As suddenly as he’d swept into their lives Bo had departed, and his passing was a shock.
[dcs_head top=”0″ color=”#666666″] [/dcs_head]

They remember him and reminisce when they see the wooden box of ashes that reads My Beloved Pet. The couple says they often took that box with them on road trips along coastal highways. “Bo loved to ride,” says Michael, wiping away tears.

In September they were returning from a Pensacola trip when they noticed a large white dog running along the side of the road. When it was nearly hit they pulled over and stopped. Michael approached the dog, extended a hand, and was immediately struck by the resemblance to his former dog, Bo.

When the friendly canine plopped down at his feet, Michael took the opportunity to check his tags. “He had a rabies tag and a microchip tag,” he said. “I called the 800 numbers, but the owner hadn’t registered the microchip.”

Not knowing quite what to do, the couple decided to take him home and make plans to try and find his owner. Michael said the dog was appreciative of their kindness. “I could see Beauregard in his eyes,” he said. “The way he looked at us with affection. ‘Thanks for saving me.'”

After a series of phone calls, they were able to track down the lost dog’s owner. A Pensacola veterinarian’s dog had escaped through an open fence gate. They spoke with a receptionist at the office, and made arrangements for the vet to meet them at their home in order to pick up the dog.

Before that brief meeting ended, and before the mysterious canine was gone, a remarkable thing happened. For the first time, Michael and Rosie would hear the name of the dog they had saved. The vet looked at him and simply said “Beauregard.”
[dcs_head top=”0″ color=”#666666″] [/dcs_head]

While neither of the Reaches are religious, they do not doubt that experience. As Rosie’s mother would say, “Bo just came for a visit.”

Seeing Bo again, they say, gives them closure while keeping the memory of him especially vivid. And the ‘new’ Beauregard they met is doing just fine, watching over and playing on a 30 acre spread at his home with the vet. He’s loved, content, and wants for nothing.