For an active man on the hunt for a canine best buddy, a border collie mix seems a good choice, so when Juan Medina was looking for a new pal to share his beachy lifestyle, he headed to the RSPCA shelter and Felt a something click with Mia.

“There was a connection with her,” Juan told The Dodo. He walked several of the shelter’s adoptable dogs, then went home to sleep on it. Mia, though shy, remained steadfast in hsis mind. “Two days later, I went back to see if she was still there,” he said. She was, and Juan took her home.

Shelter staffers knew that Mia had been someone’s pet before landing there. She’d come in with a collar. She was already spayed. But they couldn’t find her owners, even after three months of trying. When Medina stepped in, as is always the case for animals finding their forever homes, her whole life changed for the better.

Medina, a Venezuelan native, has been living in Australia for the past decade. He’s an avid surfer. And so Mia became his beach dog. At the outset, however, she was content to wait for dad on shore while he rode the waves. But on a calm day, Medina decided to get her in the water to see if she’d like it. 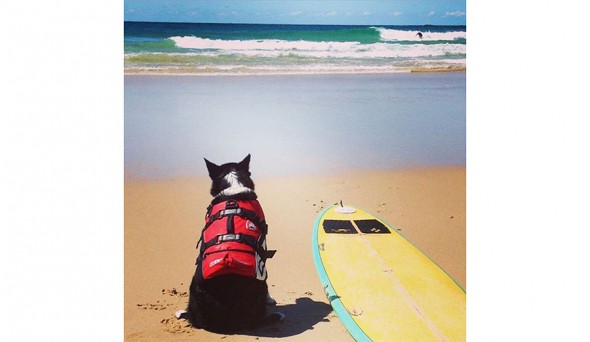 “She was scared the first time,” Medina said. “I pushed her in a few waves, but she fell off.” But when he decided to fit her with a doggie life jacket, her whole outlook changed — she became a surf dog!

“Now when I take the longboard and her life jacket to go to the beach she goes crazy,” Medina says. “She loves the water and loves swimming, and she enjoys being with me all the time.”

In fact, Mia is a self-taught body surfer.

“She does this all on her own,” Medina said to The Dodo. “I throw a stick into the ocean, and she goes after it, and catches a wave back to shore.”

Years later, she is a dog transformed from the shy pup Medina took home (and she even has her own Instagram account!).

“She brings happiness and fun to my life, someone to care about it,” Medina said. “I just want to give her love and a happy life. She is the best dog ever.”