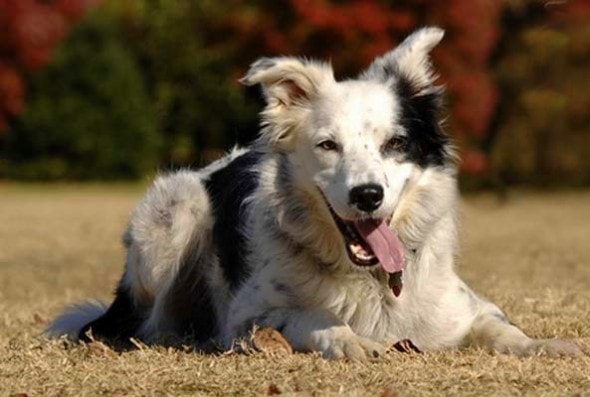 Some of our dogs aren’t brilliant – you know the kind – they’ll stare at and lick your finger when you point, or they bonk their head on the same wall every day, but they’re adorable and make us laugh, and we love them anyway. Others have smart dogs that know how to do lots of little tricks, or are clever enough to escape from anywhere. But few people can say their dogs are as smart as Chaser, the Border Collie who knows over 1,000 words.

The following is an article written by Chaser’s owner, John W. Pilley, author and emeritus professor of psychology at Wofford College.

When people ask me how smart my dog is, I say that she has about the intelligence of a toddler. Chaser is a nine-year-old Border Collie who knows 1,000 words, but any dog is potentially capable of reaching toddler-level cognition and development, including learning the basic elements of language.

Thanks to her language learning, Chaser has been called “the most scientifically important dog in over a century” by Duke University animal-intelligence researcher Brian Hare. Language learning is an interesting test of animal intelligence because it requires unconsciously grasping a series of concepts in much the same way that children do as they advance from wordless babbling to complete sentences. For me, the most crucial common characteristic of dogs and toddlers is that they both learn best through play. I made games and other playful interactions with Chaser the basis of an ongoing conversation, speaking to her throughout the day in simple words and phrases just as I would to a toddler. Our language games revolved around finding, chasing, fetching and herding her toys — behaviors that released her instinctive drives as a Border Collie. Instinct-based play gave the toys value in Chaser’s mind, and that in turn gave value to the words — proper nouns and common nouns, verbs and even prepositions, adverbs and adjectives — I spoke to her in connection with the toys. 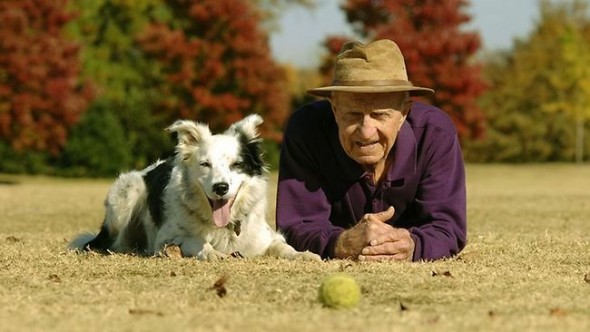 Chaser’s first conceptual breakthrough came when she was five months old when she realized that objects like her toys could have unique names. Like a young child, she also grasped the referential cues — my holding up a toy and pointing to it while saying its name — that enabled her to map a particular word to a particular object (called “one-to-one mapping” by language-learning researchers). That learning opened the door to a succession of concepts. Chaser learned that nouns and verbs have independent meanings and can be combined in many different ways (combinatorial understanding). She learned that a single thing can have more than one name, like a favorite stuffed animal that can be identified both by a unique proper name like Franklin and the common noun toy (many-to-one mapping). She learned that a single common noun, like stick or car, can identify several different things (one-to-many mapping). And she learned to reason by exclusion, meaning that she can identify a new object she’s never seen from among a group of familiar objects simply on the basis of hearing its name for the first time (drawing an inference). She achieved all of this learning, including knowing the proper-noun names of over 1,000 stuffed animals balls and Frisbees in her first three years.

Creative, conceptual learning builds on prior learning in an open-ended way. Most recently, Chaser has learned to successfully interpret sentences with three elements of grammar (“To ball, take Frisbee”) and a semantic reversal (“To Frisbee, take ball”). And I am using verbal and visual cues to enhance her ability to learn by direct imitation of me and to match to sample. 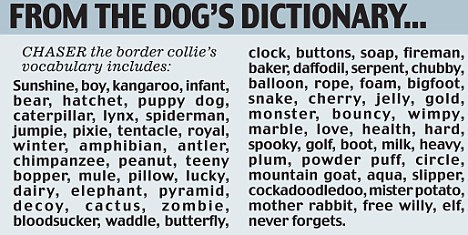 Learning by imitation — I tell Chaser, “Watch what I do. Now you do it” — requires her to have the conceptual understanding, conscious or unconscious, that I want her to copy my behavior. When toddlers grasp the concept that we want them to imitate us, science says that they are demonstrating an implicit theory of mind and understand, unconsciously, that another person has a unique point of view different from their own. Matching to sample — I hold up an object, like a shoe or a ball or a stuffed teddy bear, and ask Chaser to find another one — is also an abstract conceptual challenge; it requires understanding, “I’m supposed to find something that has the same characteristics.” This, too, is a signpost in toddlers’ cognitive development.

Like toddlers, Chaser and all other domestic dogs understand human pointing, more evidence that they have an implicit theory of mind. It is fascinating that in addition to dogs, elephants also seem to understand human pointing, whereas our closest animal relatives, chimpanzees and bonobos, do not. (Chimpanzees, bonobos and other primates have demonstrated implicit theory of mind in other ways.) These disparate findings show that science has a long way to go before it can say exactly what constitutes intelligence in any species, including humans.

Science is finding increasing evidence of creative problem solving, together with a propensity for play, in animals as diverse as crows, parrots, dolphins, dogs and primates. We are nowhere near being able to rank these animals in a hierarchy of intelligence, but dogs seem to be particularly good candidates for language-learning experiments because of their shared evolutionary history with humans and their unique interspecies social relationship. The greatest misconception about animal intelligence is that animals and humans have completely different kinds of minds. Through play, however, Chaser continues to learn things that were once thought to be possible only for humans, demonstrating that our minds and dogs’ minds are much more alike than we think and differ much more in degree than in kind.