A six month old Boxer puppy from Georgia is being hailed as a hero for evacuating his family from their home after detecting a gas leak. 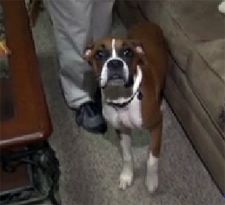 “He knew something we didn’t know. He sensed something wasn’t right,” said Jason Hyde.

Hyde and his family say they owe their lives to their faithful companion. They were gathered in their living room and decorating in preparation for the Christmas holiday when their dog Ollie became visibly agitated and started acting out to get their attention. At first they just thought he wanted to go out.

Ollie’s obvious stress prompted his family to follow him outside and join him in their yard. Once the entire family was evacuated, Ollie relaxed. That’s when it occurred to Jason Hyde that the gas fireplace had been left on.

He went back inside and realized that the flame was not lit. Ollie had smelled the gas pouring from the unlit fireplace and spreading throughout the home – and knew something was wrong. And when his family joined him in the yard to ascertain the source of his distress, they may very well have dodged a disaster: “We don’t know how long the gas would have poured out, and we do light candles,” said Sheree.

The Hydes are understandably grateful, and say they are blessed to have found Ollie. “I just think that it’s cool that God has made a creature, made a dog, as smart as this dog is and I am glad to have him,” said Jason.

“We are very thankful for him,” added Sheree.