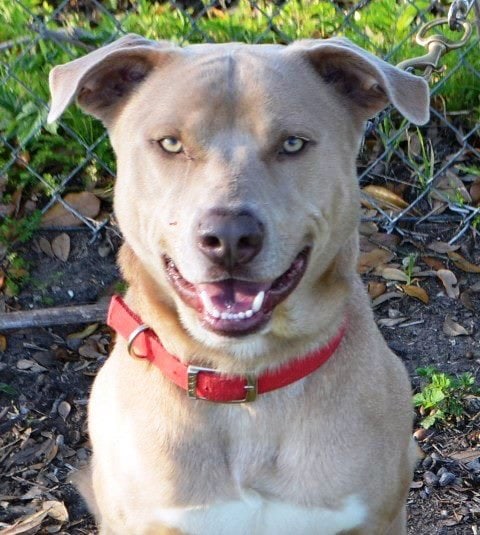 Three weeks ago Angela McGhee, founder of S.A.V.E. Rescue was having trouble finding homes for three pit bull mixes that were at the Alvin Animal Control. City ordinances in many Texas cities don’t allow for pit bulls to be placed in homes. The only hope for the three pit bull mixes, including Scotch, was to be taken by a rescue to find a home elsewhere. Using Facebook McGhee and Alvin Animal Control got the word out about the three dogs. “All three had been living there for almost two months; they were running out of time,” said McGhee.

Melanie Leon saw Scotch’s picture on Facebook and thought he might be perfect for her son Gabe for his 12th birthday. When Gabe was 10-years-old he underwent a heart transplant. His transplant has been a success but he was forced to give up his dog when his anti-rejection medicine caused him to develop severe allergies. “It broke my heart to have to find a new home for Kevin,” said Leon. “That dog helped him through so much. But the doctors said he was just too sick, and we couldn’t take any chances.”  As time has passed Gabe has gotten better and his allergies have gone away and Leon knew he was ready for a dog again. Leon contacted McGhee asking whether she could adopt Scotch and if he’d be a good fit for her son.

McGhee is usually leery of adopting dogs out to people from far away who she doesn’t have the opportunity to meet, especially when it comes to pit bulls. “Many times people email us from outside of the state wanting to adopt animals, and we generally don’t do that because we can’t get to know the person, and transporting the animal is expensive,” said McGhee. “Plus, they probably have plenty of animals who need homes where they live! It kind of raised a red flag, to be honest…that someone from so far away wanted to adopt this pit bull mix. It’s sad but sometimes we are a little suspicious when it comes to pit bulls.”

Then another email changed everything. Dr. Susan Pickle is a local veterinarian and by chance happened to know Melanie Leon. They had met when Gabe was in the hospital waiting for his transplant, at the same time Pickle was there with her great-nephew Liam. Only one-year-old Liam was also waiting for a heart transplant. Sadly Liam didn’t survive, but while at the hospital Dr. Pickle had spent a lot of time with Leon as they both waited in fear and anxiety as these young boys they loved waited for their second chance.

Dr. Pickle knew the Leons would be a great family for Scotch. “I was thrilled she wanted to adopt him,” said Dr. Pickle. “This story is all about second chances, and this is an amazing home, an amazing second chance for Scotch!” Leon had contacted Dr. Pickle about Scotch and hoped she could convince S.A.V.E. that the Leons were the right home for Scotch. With Dr. Pickle’s help S.A.V.E. agreed and this week with the help of the volunteer organization K9 Airlift Scotch made the trip to Arkansas to meet Gabe just in time for is birthday.