Dollar General employees in Shafter, California got a bit of a surprise when a husky trotted in a stole a loaf of bread.  He managed to get away, but when he tried to hit the same mark the next day, he – and his accomplice – were nabbed.

“This dog came in and he was really friendly, looking around,” said employee Abby Lopez. “Next thing we know, he grabs a loaf of bread and starts running around with Steven.”

Seeing how easy it was to get away with stealing the loaf of Wonder Bread, the cunning canine decided to try his luck again the next day. 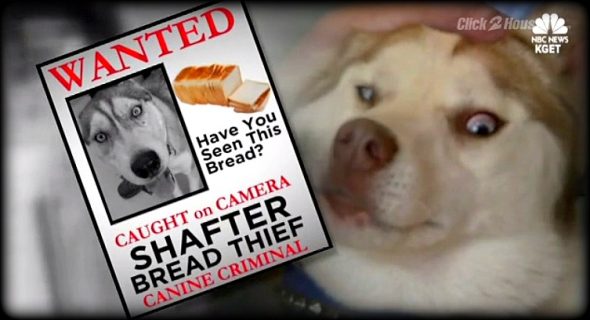 “They end up getting greedy, which is why they get caught, and unfortunately in this case, the culprits were apprehended,” said animal control officer Nick Riddick.

The dashing doggos had no tags, and so were taken to the Shafter Animal Shelter.

“They will be held for the requisite time period after which point we will certify them good for adoption and they will most likely be put up for adoption,” said Riddick.

The best part of this whole story is the news reporter pretending to make the case out to a serious crime, and Riddick for going along with him!