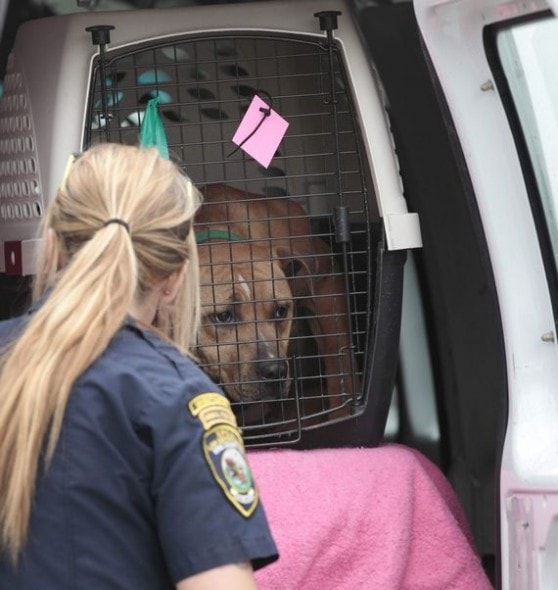 According to authorities in the Western New York area, they’ve hit “the biggest dogfighting ring in Buffalo.”  Twenty dogs were seized, and one unfortunately had to be put down.  They also make six arrests.

The operation was spearheaded by the Buffalo Police, which had assistance from a brand new, Anti-Dogfighting Task Force, the ASPCA, the SPCA of Erie County, and several SWAT squads.

Six different locations on the cities East Side University District, and one location on Grand Island were hit in the raids early Friday morning.  This raid was set to make a good sized dent in operations of these dogfighting rings.  Apparently, underground dogfighting is becoming a very big problem in the WNY area.

During one of the raids on an address on Loring Ave in Buffalo, six dogs were taken away, and one had to be shot, they were all scared, traumatized, and scarred from fighting.  These dog were not even kept indoors, as all six were pulled from crates stacked in the back yard.

Five arrests were also made Friday, and at very least, one more is expected.  Buffalo Commissioner Daniel Derenda, had not yet released the names of those being charged, and exactly what those charges are going to be.

According to officials at the SPCA Serving Erie County, the dogs will be “examined, medically treated and otherwise cared for by the SPCA.

A resident, identifying herself as Deidra Patterson, said the dog shot by authorities at the 269 Loring address was a case of mistaken address.  Ace, the 13-year-old boxer who was shot, was in no way part of any fighting ring.  Ace, as the dog was called, actually belonged to Patterson’s 16-year-old niece that has had all sorts of medical issues, and has become very attached to her Ace.  They were inseparable since she was a child.  Besides her parents being both deceased, now her dog is gone too.

“That dog was her life, “said Patterson.  “He was a family pet that kept that girl alive.  He was her life.”

“They got the wrong person,” Patterson said.  She insists that there is no dogfighting operation on Loring Ave.

It’s part of the reason that the Anti-Dogfighting Taskforce was reinstated late last month.

“It’s particularly disturbing when you look at how the animals are abused, how they’re chained and drugged,” said Mayor Byron W. Brown.

“It’s incredibly disturbing and, in some contexts, very frightening because people live in these areas where this is occurring.  This is why we moved so swiftly and took it so seriously,” Brown added.

“Dog fighting is a national epidemic, and we are grateful for local authorities in actively pursuing this case and seeking justice for these innocent victims who were forced to live in deplorable conditions and subjected to horrific abuse,” said Tim Rickey, the ASPCA’s vice president of field investigations and response.

Experts from a NYC based ASPCA reports that many of the dogs seized “exhibited scars and wounds consistent with fighting, and some appeared to be emaciated and in poor health.

Other than just the dogs, vast amounts of other items that are commonly found in areas this is going on, spent syringes for drug delivery to the dogs, and other such things have been found in the locations the dogs were taken from.

Derenda said it is most likely a situation where the officers involved in the one dogs shooting death did so out of necessity.

“If the dog was shot on entry, it was because the dog attacked,” he said. “The officers have to protect themselves.”

This whole string of arrests and investigations stem from a young pit bull named Ginja, whom after being rescued once from a dogfighting situation, was stolen from the City of Buffalo’s Animal Shelter on Oak Street.

Ginja was initially rescued in a December raid at an Erb Street address.  This resulted in very heavy animal abuse charges brought up on a suspended Buffalo police cellblock attendant.

Ginja was taken from the shelter, but has been returned, as can be seen in the link to a story on our page, linked below.