By now you may have seen the sad story of Cabela, the Tampa dog who was tied to train tracks, shot, and left for dead.  She’s a strong girl and survived, and now her former owners have been arrested.

Police responded to a call of shots fired last week and found the one- to two-year-old mix breed dog tied to the tracks with a belt.  An oncoming train had to be stopped before the dog was freed and rushed to a veterinarian.  Her front right leg bones were shattered by one of the bullets.

“It just turns your stomach,” Officer Greg Coller told WTSP-TV. “I really don’t know what else to say.”

She underwent surgery and it was determined that amputation wasn’t necessary.

“Cabela came through surgery with flying colors and four legs,” said a post Friday on the Facebook page of Tampa Bay Veterinary Emergency Service. “The surgeon decided to pin it instead of amputation. It will be 6 to 8 weeks before we know whether she will regain full use and motion.” 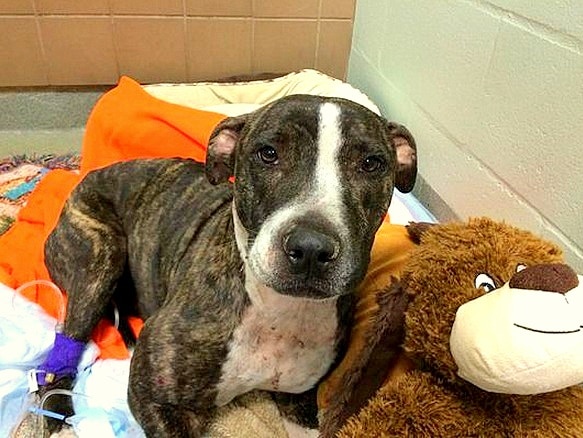 Cabela’s owners, who said she either escaped or was stolen from their yard four months ago, came to visit at the clinic, and relinquished ownership so she could get the best medical care and home possible.

On Wednesday, two teens were arrested and charged with the shooting.  Within hours, two others were arrested:  Kenny Bell, 21, and Darnell Devlin, 18.

“The two individuals that were arrested indicated that she was purchased for dog fighting. And she was kept on that property for that purpose,” said Assistant Chief Eric Ward.

At the home where the young men were arrested, two more dogs covered in what appear to be fighting wounds were rescued.  Their mother, Alicia Young, claimed her boys had nothing to do with dog fighting.

“There is no proof of dog fighting equipment in our house, around the house, or anything like that,” she said.  “They don’t. We don’t dog fight. I don’t even let my two dogs. There was nothing like that happening. I would not allow that, not for a second.”

Despite her argument, animal service investigators believe the dogs were used to fight. 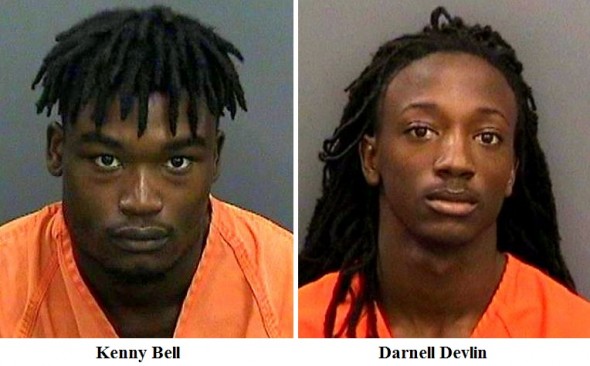 “The injuries to those animals were consistent with dog fighting.” said Ward.  “There were several injuries, not only along the neck, but all over their bodies.”

Additionally, Devlin and Bell confessed to their sinister intentions.  They bought Cabela to fight her, but when she refused, they convinced the 17-year-olds to take Cabela and kill her.

“They are all neighborhood associates. They’re all friends, and they went together to the railroad tracks to dispose of her,” Ward explained.

The teens were arrested for aggravated animal abuse and trespassing.  Bell and Devlin were each brought up on two charges in connection with dog fighting.

Despite her trauma and heartworm, Cabela is doing amazingly well, and has been showered with gifts and love. 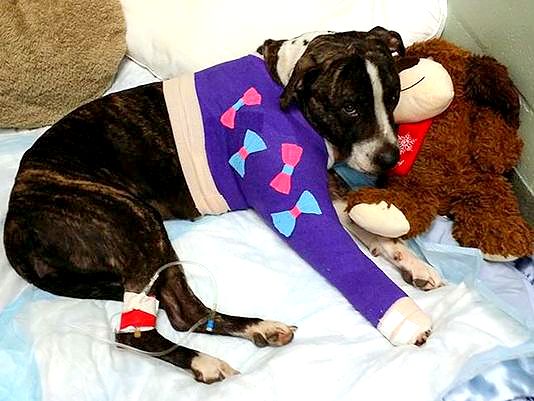