Members of the Coast Guard on a training exercise ended up in a rescue situation yesterday when a crew in a helicopter spotted a small dog being swept out to sea.

The dog, believed to be a cock-a-poo, was swimming in the waters off the Moray Coast of Scotland. Those in the helicopter kept watch until a lifeboat, based onshore at Findhorn, made its way out to the pooch and successfully pulled the dog onboard. 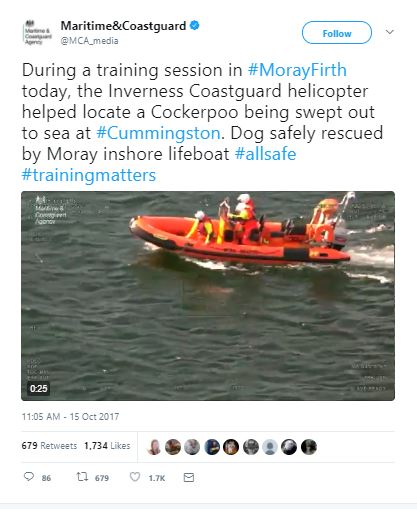 In a video Tweet, the Maritime and Coastguard agency wrote, “During a training session in #MorayFirth today, the Inverness Coastguard helicopter helped locate a Cockerpoo being swept out to sea at #Cummingston. Dog safely rescued by Moray inshore lifeboat #allsafe.”

The BBC reported that an MCA spokesman later said, “”(The helicopter) was quickly able to locate the animal and alert the Moray inshore rescue boat based at Findhorn to its location. They pulled the dog onto the boat and returned it to its owners who were waiting on shore with the Burghead Coastguard Rescue Team.”

The dog was reported to be safe and in good condition.