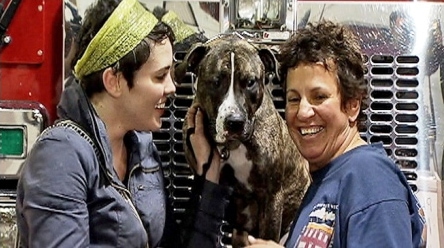 Firefighter and paramedic Tammy Rodriguez said one of her colleagues carried a lifeless dog from the scene of a Bucktown neighborhood fire and placed it in her arms. A dog owner herself, Rodriguez knew there was no time to waste, and quickly put her training and experience to work.

In her determination to save the dog, Rodriguez used two entire tanks of oxygen, fed through a mask, while performing CPR on the animal. “For a while, there, it wasn’t reacting, but I think just the positive pressure of oxygen made it start breathing, which was exciting. And then we just kept working her and all of a sudden she just opened her eyes… and then she got up,” recalled Rodriguez.

Once revived the grateful dog wagged its tail and licked at Rodriguez’s face. The two were reunited in a press conference at the Engine 57 station house Friday night, where the beaming firefighter had a chance to hug Howdy and spend a few minutes with his grateful owner, Jorden Grennan.

“I have three dogs myself, and I would expect that if that had happened to my home that they would do the same for my puppies,” said Rodriguez. “I mean, they’re part of our family and when I saw that, I was like, ‘Oh my God, I can’t just let this dog die.

30 thoughts on “Chicago Firefighter Breathes Life Back Into Dog”