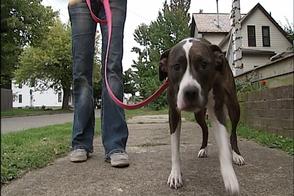 The city of Newark, New Jersey is reconsidering its vicious dog law. Currently the law labels all pit bull type dogs as vicious dogs. The state of New Jersey has removed the automatic labeling of pit bull type dogs as vicious, but as a charter city Newark does not have to do the same. The City Council Safety Committee has been discussing whether they should change the ordinance or not.

Under the current Newark ordinance owners of pit bull type dogs are required to post “dangerous dog” signs and buy a dangerous dog tag in addition to the regular dog tag. These extra tags cost $50. Owners must also microchip and spay or neuter their pit bull type dog. Finally, owners are required to keep the dog in a fenced-in-yard or confined to a locked enclosure. When taking the dog off of their property they must be on a leash 6 feet or under.

Councilman Duke Frost opposes changing the current ordinance and has said police officers have told him they prefer no change to be made. “The law enforcement has to deal with these dogs,” Frost said. “Move slowly. There is no reason we can’t keep the law exactly as it is. Keep the requirement that protects law enforcement and people that have to deal with these dogs.” The city’s animal control officer, Toby Willis, says about one-third of the call he deals with involve pit bulls and he supports keeping the law as it is. Councilman Frost says he isn’t against the breed but basing his decision on the information from those who deal directly with animal calls.

Councilman Jeff Rath sits on the other side of the debate, favoring treating pit bull type dogs just like every other dog. He has proposed a compromise to try to get the city to move in that direction. His compromise would remove pit bull breeds from the automatic label as a vicious dog but would keep some special rules for pit bull type dogs. The compromise would require these dogs to be restricted by a fence, cage or tether, or contained within a 6-foot fence. Rath says, “It’s like putting a criminal on parole. Let the pit bulls free (of the label), but cautiously watch them to protect the public as well.”

The safety committee plans to discuss the issue again in two weeks.