And so the Campbell County Animal Shelter in Melbourne, KY, did just that.

Earlier this week, they were at full capacity — roughly 50 animals — which meant that some would have been on deck for euthanization, something staffers actively work to avoid.

“We need to keep at least a little bit of space so we don’t have to euthanize to make room later,” assistant director Lisa Crummen told NBC affiliate WLWT on Monday.

And so, the shelter waived adoption fees in hopes of making room.

As of yesterday, every dog had been adopted. 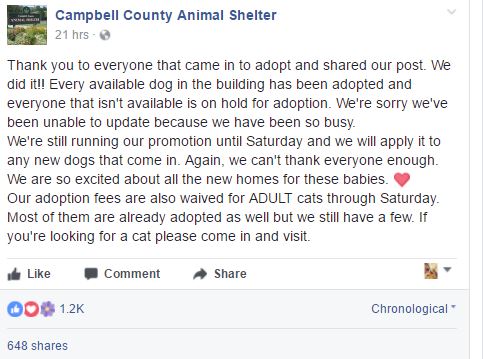 “Again, we can’t thank everyone enough,” shelter workers wrote on the facility’s Facebook page. “We are so excited about all the new homes for these babies.”

Adoption fees are still waived for all adult cats through Saturday, but those in the area looking for a pup should head over, as well. Sadly, shelters never remain empty for long.