The city of Cleveland is considering an ordinance proposed by Councilmen Terrell Pruitt and Matt Zone that would outlaw long-term outdoor tethering. 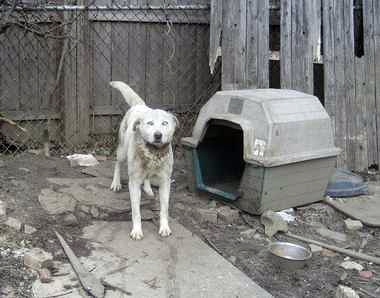 Local animal rescue groups are applauding the proposal, and say this is a change that can’t come soon enough.

“The No. 1 dog-related reason for calls to our humane investigations hot line is to report owners who are not providing their dogs with adequate food, water or shelter,” said Cleveland Animal Protective League director Sharon Harvey. “In the vast majority of these cases, we find the dogs living on chains. And, dogs who are constantly tethered are more likely to be aggressive and become nuisance barkers as a result of boredom.”

If passed, the bill would prohibit the tethering of animals between 10 p.m. and 6 a.m.,  and would make it illegal to tie a pet out for more than three hours in a 24-hour period.

A minimum length of 20 feet is specified for ropes or chains, and pet owners are expected to consider the elements when tying a pet out, even for brief periods: tethering would also be banned if heat or tornado warnings have been issued. Access to shade and water at all times would be required, and prong, choke, or otherwise ill-fitting collars would be outlawed.

First time violators would face animal neglect charges, a first-degree misdemeanor. Sharon Harvey says this is a big step in the right direction for the city and its pet population.

“Based on what we see in the field every day, Cleveland is in desperate need of a law that will restrict tethering and allow these social, companion animals to live indoors as members of their families,” Harvey said.