Dogs treated with platelet therapy from a unique filter-based process showed significant improvement from osteoarthritis-related pain and lameness according to a new study commissioned by the Pall Corporation. Results from the study, a two-center, prospective randomized controlled clinical trial, were revealed at the 39th Veterinary Orthopedic Society (VOS) Meeting in Crested Butte, Colorado. 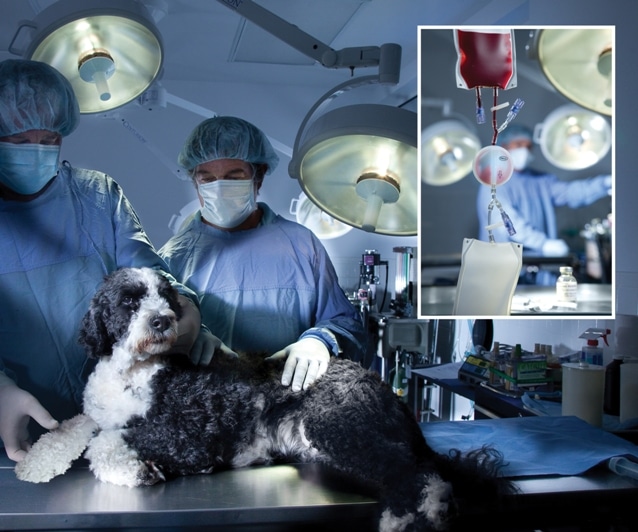 “This study is the first to provide evidence in support of platelet therapy for canine osteoarthritis,” said Dr. Alicia L. Bertone, DVM, Ph.D, Diplomate of the American College of Veterinary Surgeons (DACVS), Professor and Director of the Comparative Orthopedic Research Laboratory at The Ohio State University, and senior author of the study.

The findings were presented by the study’s co-author, Dr. Maria Fahie, DVM, DACVS and Professor of Small Animal Surgery at Western University of Health Sciences, College of Veterinary Medicine.

Osteoarthritis, a progressive chronic degenerative joint disease characterized by pain and stiffness in the joints, is a major concern for owners of the more than 72 million pet dogs(1) in the United States. Approximately one in five adult dogs in the U.S.(2) suffers from osteoarthritis. Common canine treatment methods can range from weight control and exercise to the administration of nutraceuticals and anti-inflammatory drugs. In an effort to treat the condition rather than just the symptoms, many veterinarians have begun offering alternatives like minimally-invasive cell therapy. Typically offered in conjunction with some of the more traditional methods, cell therapy can help accelerate healing and lead to longer-term relief.

SECUROS canine platelet enhancement therapy (C-PET) from MWI is a filter-based system that relies on Pall’s unique technology to concentrate platelets and their associated growth factors — which reportedly enhances wound healing and induces tissue regeneration — from a small volume of a dog’s own blood. The C-PET system involves a simple process. It includes sedating the dog, drawing blood, filtering the blood, recovering the platelet concentrate, and delivering the cell therapy. In most instances, the C-PET process can be completed in 30 minutes or less. Additionally, the SECUROS C-PET system does not require a centrifuge or power supply, a significant advantage over other platelet enrichment techniques.

“This study employed both subjective questionnaires and objective measures of lameness with improvement demonstrable within C-PET treated animals that was not seen in the control groups,” said Michael P. Kowaleski, DVM, DACVS/ECVS, Associate Professor of Orthopedic Surgery at Tufts University’s Cummings School of Veterinary Medicine, who reviewed the data.

Both centers in the trial (Western University and The Ohio State University) enrolled 10 dogs with radiographic evidence of osteoarthritis, for a total study size of 20 dogs. All dogs were randomized to receive either saline or platelet therapy produced with the C-PET product. They were evaluated prior to treatment and again three months after treatment. The dogs were withdrawn from medication for pain one week prior to each evaluation and allowed to continue medication as needed between evaluations. At the end of the 3-month period, the treatments were un-blinded and owners of dogs who received saline were given the option to cross over to C-PET treatment and be re-evaluated again 3 months later.

Dogs were assessed for pain and lameness using two visual analog scale questionnaires(3) completed by the dog owners. Dogs enrolled at The Ohio State University were also subjected to testing by force plate kinetics, an objective measure of lameness. In all three assessment methods, dogs treated with their own blood platelets obtained using SECUROS C-PET demonstrated significant improvement in pain and lameness.

“The data were convincing because animals randomly assigned to saline control treatment did not improve. Conversely, dogs treated with C-PET, as well as those that elected to cross over to C-PET treatment, did improve, thereby demonstrating a level of efficacy,” commented Dr. Fahie.

For more information on how to obtain a SECUROS C-PET kit, visit: www.securos.com .

About the Trial Methodology and Platelet Therapy

Study results demonstrated that, on average, animals given C-PET but not saline alone showed statistically significant improvement in measures of pain and lameness whether using questionnaires or force plate kinetics measurements. Saline treated animals showed no improvements and there was an indication that some may have gotten worse. When those dogs crossed over to the treatment arm, they too improved significantly by all measurement instruments: the Canine Brief Pain Index and the Hudson visual analog scale for lameness as well as force plate kinetics measurement of peak vertical force (PVF). PVF measures the amount of weight the animal can place on their legs. This is the first study of intra-articularly administered platelet therapy for osteoarthritis in dogs that demonstrates significant improvement of a magnitude that rivals that seen with pain killers using both questionnaires and objective measures of lameness.

Platelet therapy technology is derived from the patient’s own blood. The prevailing mechanism of action of platelet therapy stems from the belief that the growth factors they secrete serve as a homing signal for the recruitment of stem cells from other parts of the patient’s body to the site of application of the platelets.(4) Stem cells are defined by their ability to self replicate and differentiate into the cells of various lineages including collagen-producing chondrocytes and bone-producing osteocytes, both of which play a role in maintaining healthy, and repairing, defective joints.