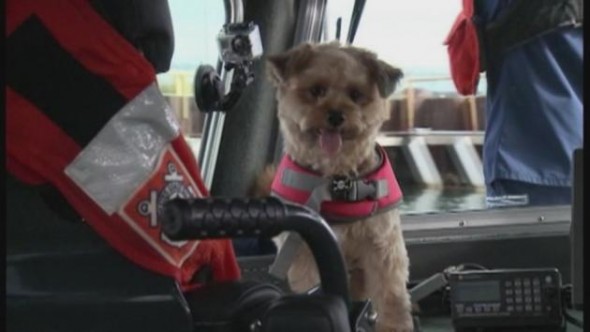 The crew at the Coast Guard station in Milwaukee, Wisconsin is in the process of making a stray dog that they rescued from the streets their official mascot.  Barnacle is a big part of the family at the station, and the service men and women want him officially recognized as such.

Barnacle has seemed to fit in quite nicely with the crew in Milwaukee.  He loves the other people he’s with, enjoys a lot of attention and always seems to find someone to get a game of fetch going.  What Barnacle loves most though, is getting out on a boat with his crew on patrol.

Just last summer, Petty Officer Anthony Kaminski’s wife came across Barnacle when when walking through a parking lot in South Florida.  When Kaminski was relocated to Wisconsin, Barnacle came too.

“He was a good dog right from the beginning,” Kaminski told CNN.  “He’s quiet, (and) meshed well with the family.”

Upon arrival, Barnacle took to his new surroundings very well, and was well loved by everyone on the crew.  So it was decided that they would hold a vote, and get it made official.  Barnacle would be considered an official member.

“I had to talk to the crew about it because ultimately the crew had to take care of him and the crew is responsible,” Chief Eric Hopperdietze told CNN.

Having Barnacle on board as a team member and official mascot has really raised morale for the brave men and women stationed with him.  There’s just the small matter of paperwork that needs to go through before the United States government officially recognizes Barnacle as a full Coast Guard member, however the people that get to work with him every day already consider him family.

“From the first day he arrived at the station he was just right at home and just loved everybody,” Hopperdietze told CNN.