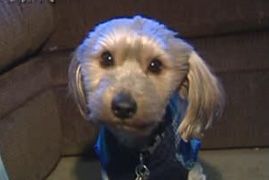 After two long years apart, a Utah woman and her dog have much to celebrate. The pair were separated in 2008 when Barkley went missing. Melissa Alexander spent the next two years searching for her beloved pet before deciding it was time to move on and make room for another dog in her home.

Alexander logged on to the Salt Lake County Animal Services web site recently to search for a new companion, and was more than a little surprised to find her long lost friend listed as available for adoption. Barkley was dropped off at the shelter as a stray in October. Melissa says she knew immediately it was her dog and their reunion at the shelter proved it.

Animal control officers say they can’t recall such a reunion that resulted from such a long span of time.