A Fountain, Colorado man died Saturday after falling through thin ice at a local park while rescuing his dog. The victim, later identified as William Tuttle, was taken to Memorial Hospital, where he was pronounced dead a few hours later, and his grieving children say they are comforted by the final words of their hero dad. Witnesses say Tuttle was seen crawling onto thin ice in an attempt to coax his dog, Brock,  back to shore.  As he neared the dog, the ice gave way, plunging Tuttle and Brock into the frigid water. 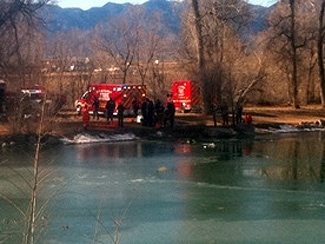 Casey O’Malley, who was fishing nearby, told 11 News it was heartbreaking to watch. “He got down on his hands and knees, and then walked out towards and to the dog. At that point the owner did fall through the ice. Him and the dog struggled for a second. The owner was able to get the dog up onto the ice.”

Tuttle’s final act was one of love: just before he went under, he was able to make one last push and get Brock back on solid ice. Unfortunately, he was unable to fight the effects of the cold, and slipped under the ice. The frightened dog reached the safety of shore just as his owner perished.

Tuttle’s nephew said the selfless instinct Tuttle displayed in rescuing his dog was typical of the kindhearted man. “He was always a caring person, there to help anyone who needed it.”

It took rescuers 90 minutes to locate Tuttle and free him from the ice at Willow Springs Pond. All attempts to revive him were unsuccessful. Daughter Megan Tuttle was with her father at the time of the tragedy, and said the last thing he said to her was that he loved her.

“I told him I love him too,” said Megan. “It’s so hard. He’s not here anymore. He was such a great man. You would never see him without a smile on his face. He was always so happy. He would help anybody out if they needed it.”

William Tuttle had brought the puppy home just three weeks ago, and the entire family fell in love with the happy youngster. “He (Brock) would come 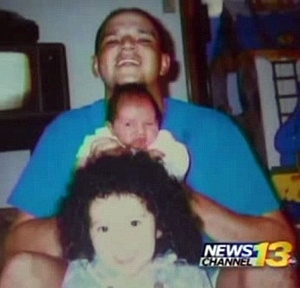 running to my room and jump on the bed and start licking me, like hey wake up, wake up,” said Megan. “And he would wake up everybody in the house. And my dad’s like ‘see he loves you guys.’”

William Tuttle loved Brock too – so much so that he ultimately sacrificed his life for the cherished family pet. And while each winter season prompts a new round of media warnings reminding pet owners not to follow dogs onto thin ice in an attempt to save them, most dog owners can relate to Tuttle’s sacrifice.

Another couple walking their boxer puppy around the pond was interviewed by a local news affiliate, and a man told reporters that despite knowing the risks involved, he would likely do the same thing if faced with a similar situation. “Honestly, I’d have to try and save the dog,” said Dan Mathis.

Tuttle’s son Taylor, 16, is mourning the loss of the father that he calls a great man, and says critics of his decision to risk his life for a dog just don’t understand the power of one’s love for a pet. “He’s my angel right now. He is. It wasn’t stupid. He did what he had to do.”