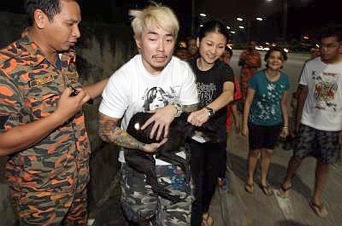 Panic broke out in the Malaysian city, Kuala Lumpur, when traffic came to a halt to save a young pup.

Only a year old, the young female dog was found living amongst shrubs on a highway divider. It is believed that she survived living on only rainwater, grass and leaves. The rescue mission, initiated by Malaysian Dogs Deserve Better (MDDB), began when a student posted information about the dog on the organization’s Facebook group.

MDDB, police officers, firemen and members of the community banded together in the rescue effort.

The police chief stated that they assisted in the effort because “it [is] everyone’s responsibility to help animals in trouble”.

“Animal appreciation here is still lacking as opposed to some other countries and because of this, each and everyone of us needs to play a role in helping a needy animal regardless of whether it’s a cat or a dog,” said ASP Ismail.

“We have saved yet another dog’s life,” said Lian who volunteers for the rescue group almost every week.

Other rescuers commented on the amount of teamwork that happened, as the community banded together to save the life of the dog.

“It was also a great feeling to meet so many like-minded people,” said Vigneshwari, a volunteer.

Though the dog is very malnourished, she remains in good health. MDDB plans to have the dog neutered before having her put up for adoption.