You wouldn’t euthanize a small child over a bit of bad behavior, right?  So why do it to a dog?  A 5-month-old pit bull mix puppy – not even old enough to be fully trained – was deemed aggressive and set to be executed by a Colorado shelter.  One man refused to let that happen, so he took to Facebook and people rallied to save her, and now she’s loving life in her new home with him.

Dr. Kent Hill visited the Pueblo branch of the Humane Society of the Peaks Region to get a buddy for his dog Bruno, who he had adopted from the same shelter eight years ago.  Bruno was supposed to be euthanized for behavioral issues, but Hill persuaded staff to allow him to adopt anyway.  Bruno is now a therapy dog, so Hill wanted to give another dog a chance.

“I decided I’d go and find Bruno a friend and saw this fantastic 5-month-old pit bull puppy,” he told 11 News.

The little gal was found playing on the road with another puppy – likely a sibling – by a local couple.

“They were really nice dogs. [They] didn’t show any signs of aggression, jumped right in the truck with us. We even had our dog with us in the truck and they all played,” said Andrew Diaz, the man who found them.

He took the dogs to Pueblo Animal Shelter, believing they’d find new homes quickly.  But apparently the pup failed her behavior test, and the shelter has a policy of euthanizing any dog that fails. 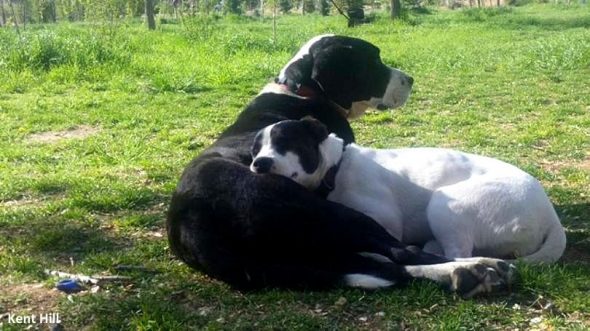 “Its behavior since it arrived has been extremely high arousal, really won’t calm down, very frontal, very controlling,” said shelter director Julie Justman.  “This is all behavior that’s concerning in an adult dog, and even though this dog is five months old, it concerns me even more that this puppy is showing this behavior at that young of an age.”

Dogs act much different in a comfortable home environment – shelters are full of strange people and overwhelming smells and sounds, which is enough to make anyone feel scared and lash out.  The pup is also young and just needs training.  A child that had spent the first several years of its life fending for itself on the streets with no love or guidance would also be aggressive.

Diaz regretted taking the dogs there once he learned the pup’s fate.  Hill did his best to convince the shelter to let him take her home as he had done with Bruno.

“It was such a little dog. It’s just a little puppy, five months old. It could have such a great future. It’s still learning and can grow out of any tendencies,” he said.

He took to Facebook with his displeasure of the shelter’s draconian treatment of a baby.  The community demanded that the shelter give the puppy another chance, so the Humane Society contacted a partner shelter with a behavior specialist.  Hill was determined to adopt her, and a month later, got his chance.

“They evaluated her over a weekend and then contacted me on a Monday and they said, ‘Do you still want to adopt this puppy? Because if you don’t, we have several staff members that would like to adopt her.’ I said, ‘Yes. I most definitely want this puppy,’” Hill said.

Now named Happy, this lovely lass is already thriving and on her way to becoming a therapy dog to help patients in his chiropractic office.

“At six months old, she’s gentle. She’s fantastic with kids. She’s great with patients. She’s already providing therapy to hurting patients,” he explained.  “She’s been exceptional since the day I brought her home. She’s been the most exceptional puppy I have ever owned.”

Hill is highly appreciative of 11 News for airing his story back in March, noting that “the people of Pueblo saved this puppy.”

He hopes that his and Happy’s story will encourage shelters to rethink their polices, and that just because a dog has shown aggressive tendencies doesn’t mean it always will – sometimes it just needs a little extra love.

“The evaluation process to determine whether a dog lives or dies I think needs to be reassessed,” he said.  “Whoever is doing these evaluations is putting to death savable, adoptable, very incredible, good animals.”

“We are very happy there was a positive outcome for this dog, and we are grateful to our behavior modification rescue partners for their help in cases like this. We’ve made huge strides in saving more animals than ever before over the past several years. We would love to develop our own behavior modification program at the shelter in the future when funding is available.”