On a recent spring day, I traveled to a remote northern shoreline of the Great Salt Lake to shoot video of the Spiral Jetty, not knowing I would end up shooting video of a bizarre event that would play out nearby.

Upon my arrival at the Jetty’s small parking which is located at the end of a dirt road an hour away from the nearest town, I met a guy named Tom.

Tom was in a panic, and I would soon see why. He explained that his dog was stuck in a tar pit hundreds of yards away. Having been to the Jetty before this seemed unlikely, but his oily appearance backed up his story. He asked if my cell phone had a signal. It didn’t.

Tom would go on to ask the few other people at the Jetty the same question with no luck. He pointed me in the direction of his dog Shelby, jumped in his car, and started the drive toward the town of Corrine for help. He believed a veterinarians services would be needed. Shelby, he said, would either need to be tranquilized or euthanized before being pulled from the tar.

“The whole time I was driving I kind of figured there was at least a really good chance that he was already gone,” Tom George said. 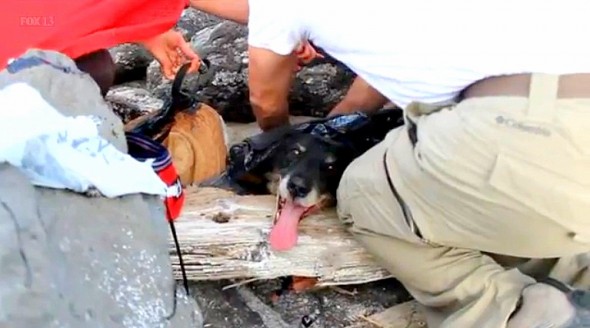 Minutes later I arrived at Shelby’s location and could barely believe what I saw. Only Shelby’s black head was sticking out above the black toxic-smelling tar.

The McGregor family from Ogden was already there, having been alerted to the situation by Tom as well.

“I was pretty sure that the back legs, the way they were positioned, they were gonna snap right where the knee was,” said Chloe McGregor.

It didn’t initially occur to me to shoot video of Shelby in his predicament. In fact, I first carried water to his location, not a camera. And even if I had a camera, I wouldn’t have taken video of what I first thought was a dying dog. The situation looked absolutely hopeless.

But as more people wandered over to Shelby’s location, things began to look up. The McMichaels from Logan abandoned their photography group at the Jetty, determined to help Shelby.

Katelyn Hoskins and her entire caravan of friends from Salt Lake City rolled in like a small army. And there were others I didn’t get a chance to meet. 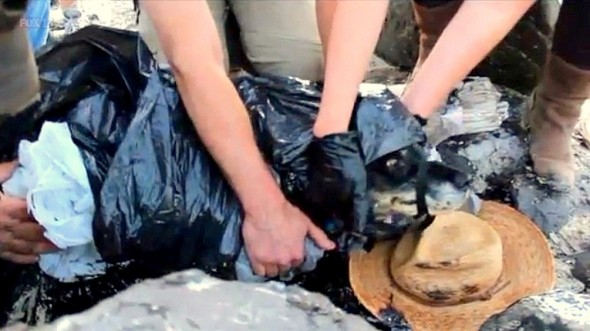 Still, no one knew exactly what to do, and that’s my favorite part of this story. Total strangers talked, and worked, shoulder to shoulder, and figured it out.

“You scrounge around cars, to get everything that you can find, and hopefully everything you put together works out,” Katelyn said.  “Grocery bags, and garbage bags, and we had some car floor mats, a tarp sort of thing.”

They didn’t know each other’s names, and they didn’t care. They ruined their clothes, they interrupted their plans, and they made a memory to last a lifetime. And yes, they saved Shelby.

“We just kept shoving plastic, and more and more plastic, and then I think what really helped was putting the sand in there,” explained Max McGregor.  “Once we got his back legs free it started to look a little more hopeful, like maybe we could actually do this.”

By the time I finally got my camera rolling, she had been trapped for an hour or more, but there was optimism in the air, and progress on the ground. You’ll see that in the video. 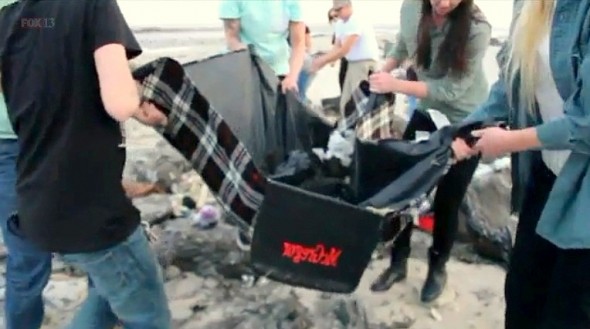 “You know what the best part is, though?” Cathy McGregor asked.  “Everybody that heard came and brought something and tried to help, and everybody had ideas, and there were 20 people out here trying to get this little dog out.  That’s Utah people for ya, I think.”

“Yeah, nobody wants to see a dog suffer like that,” Max added.

I barely had a chance to meet Tom the day of the rescue, but I’ve been able to get to know him a bit since. He is absolutely passionate about his dogs. Shelby was around ten years old, give or take, when adopted. That takes a big heart.

“The vets worked on him for six or eight hours that night,” Tom said.  “We got Shelby back from the vet – Roo didn’t really leave his side for a little while.  He slept right next to him that night.”

Tom’s veterinary bills from the hours of clean-up and days of medical monitoring came in at $1,800. He established an account for anyone who’d like to chip in. Every dollar past 1800 will go to the Humane Society of Utah. Here’s a link http://www.gofundme.com/srq8c8

Tom has also asked me to pass along a final thought: Please consider adopting an older dog from the Humane Society or a shelter near you. 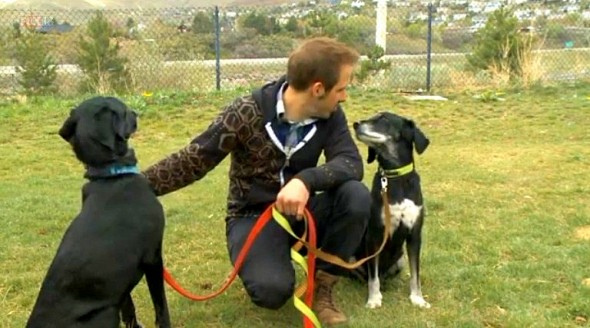