One could say that things for Batty, a bulldog that has been blind since birth, have been quite an uphill battle.  At just five months old, his previous humans dumped him off at a shelter because they didn’t want to take care of him.  Fast forward to today, and Batty is on his way to a loving forever family, with a big brother just like him.

It’s assumed that Batty was a product of backyard breeding gone wrong.  According to the Sacramento SPCA, when Batty was brought in, he was covered in his own feces, and had a large abscess on his chin.  That was about two months ago.  Now, after a little bit of TLC, Batty is doing much better, and even is learning to walk with a leash like a proper dog. 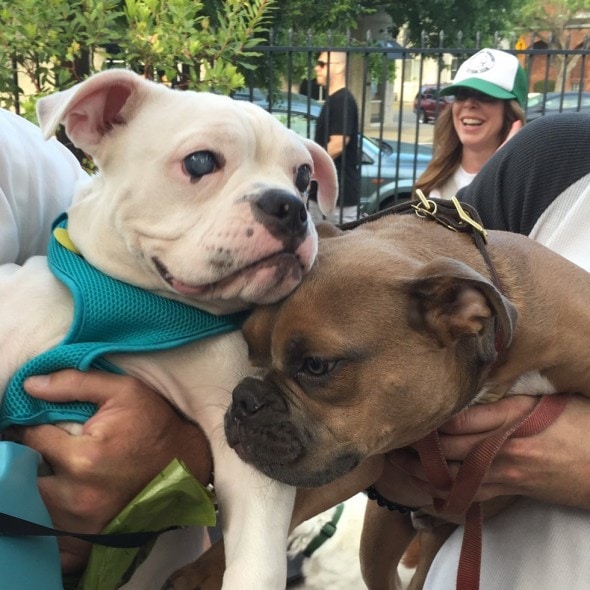 As Batty continued his recovery and training at the SPCA, he also received many gifts to help him on his way.  He got a Muffin’s Halo for Blind Dogs, which is taking a bit of getting used to, but is helping him get around a little bit easier and with a little less potential for injury.

Batty had even made a friend while at the shelter.  He was introduced to Bueller, another dog that was dumped off at the SPCA for not being able to walk.  They became fast friends, but thanks to the hard work and physical therapy, Bueller did the impossible.  Not only did he learn to walk, but actually RAN into the arms of his new forever family. 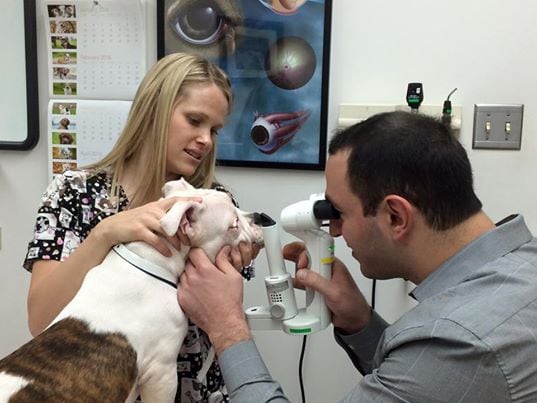 Batty was taken to a vet that specializes in doggy vision.  It was then discovered that Batty was born with a rare congenital defect in both eyes.  Although he isn’t able to see, the eyes don’t cause him any pain, so he is going to get to keep them.  To make a long story short, when Batty’s eyes were developing, the process of the iris detaching from the corneas as normal didn’t happen for him.

Despite a great deal of adversity as a pup, Batty has grown up into a fine young dog.  As luck would have it, a family was looking for a special needs, specifically a blind dog, to be a companion for the dog they already had.  This dog too has been blind since birth, so it was a real match made in heaven. 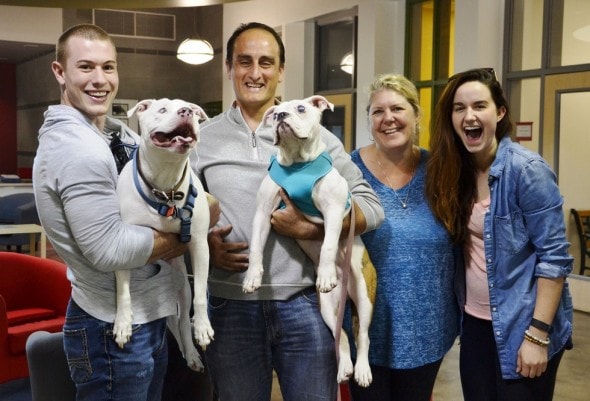 Cassidy Kraus is one of Batty’s new human parents, and she couldn’t be happier to be able to add Batty to their family.  She has apparently seen a video of Batty online and fell in love instantly.  According to her, “He is absolutely wonderful.  So full of love, cuddles, and playfulness.”

Batty is doing well in his new home with his new family.  He’s getting used to being a little brother, but the pair get along famously.  What a happy ending for a dog that really deserved one!