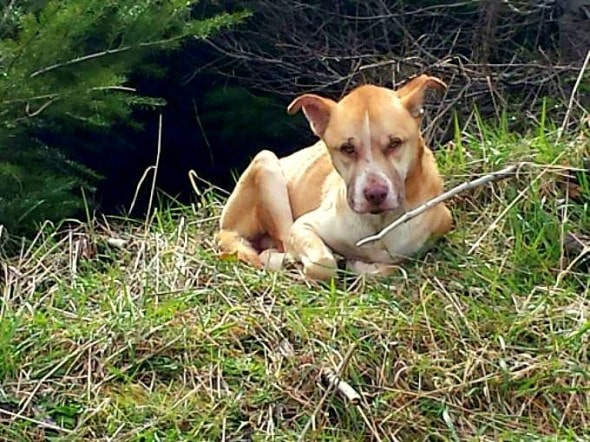 Amanda Guarascio and her girlfriend Dylan Parkinson saved the life of a dog who was slowly starving to death on Mount Rainier.  Because this dog, called Baby Bear, was so frightened of people, they had to pull out all the stops and try something really different to catch him.

Last night, I was tagged in a post about a dog up at Evans Creek that was skin and bones and unapproachable.  Evans Creek is an off-roading-vehicle park, past Carbonado, that is a gravel road that goes all the way to Mount Rainier.

Dylan and I drove up last night after we heard about him, and to our surprise, he was sitting in a little turn-off on the side of the road right where the girl said she had seen him.
We spent an hour trying to coax him to us with food but it didn’t get us very far. 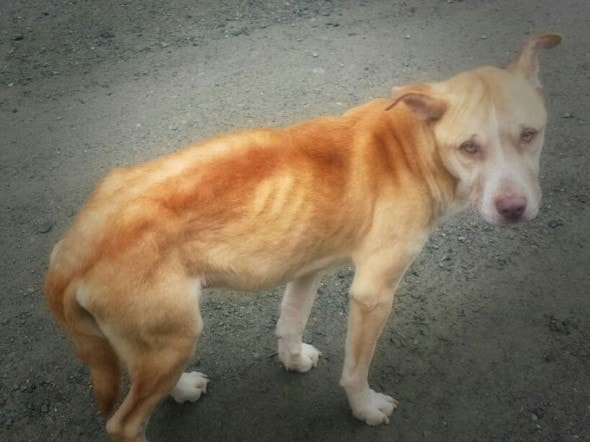 We decided to go back into town to buy some hotdogs, and picked up our awesome friend Amanda on the way back up. Amanda helped us until 3am trying to get this poor pup into the truck but we had no luck. He just kept pacing up and down the road, but occasionally took a treat from my hand.

Today Dylan and I set out again, this time we were more prepared… with pockets stuffed full of bologna!!  He was right in the same spot, and we talked to a bunch of off-roaders that said they’ve been seeing him for weeks and toss him food when they can.

We were at a loss for what to do, so we sat in our truck near him for a few hours, occasionally tossing him food and talking to/around him to get him used to us.  At some point, Dylan suggested that I try getting out of the truck again since he had taken a liking to me. 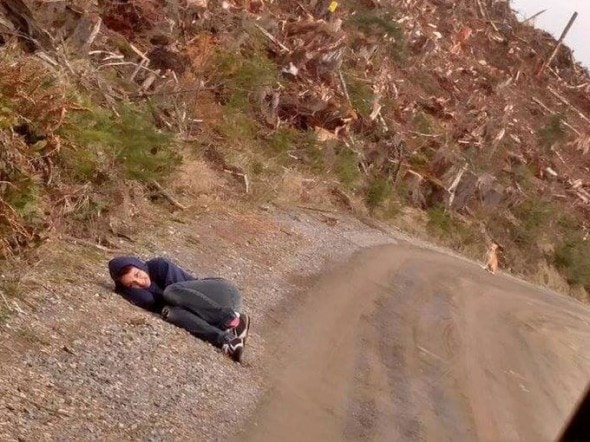 I got out and went behind the truck, and then fetalized on the gravel road right by the pup with my back to him. He growled a little bit, but eventually got close enough to smell me. I laid in the road for about 20 minutes before he lost interest and wandered off.

I got back into the truck to get warm, and we waited until he went back to a grassy spot on the side of the road to lay down. Dylan dropped me off and drove away. It was cold. So cold!!! Cold enough that it started snowing.

Once she drove away, I got down on the ground with my back to the pup, who we have decided to call Bear (okay, Baby Bear to be exact) and slowly started crawling backwards towards where he was laying. Once he started to get uncomfortable, I curled up in a ball and stopped moving. The next hour was spent slowly inching closer and closer to Bear. 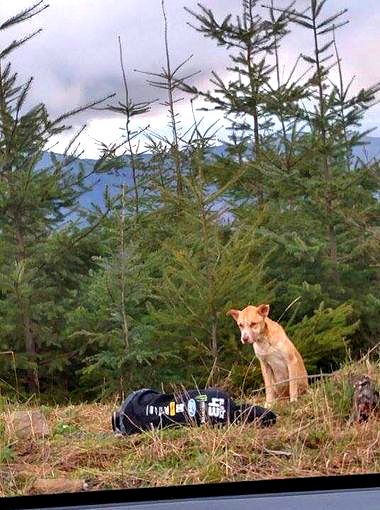 By now, Dylan had pulled back up across the road to watch us, and was also warning cars that her insane girlfriend was laying on the side of the road and not to hit me (please).

Finally, I got right up next to Bear. He growled a little bit, so I started whimpering and yawning (which is a calming signal), and continued to slowly get closer and closer until I was rested up against the sweet little Baby Bear! (At one point, he got up to try to find us shelter because he saw me as a pathetic human girl that had no survival skills, he sort of took me under his wing!)

Once we got back to cuddling, his shivering slowed down, and he even backed up against me for more warmth.  We were so close to getting him! I made sure not to try to grab him at any point because I didn’t want to lose his trust.  Then, a big truck came and scared him away from me. 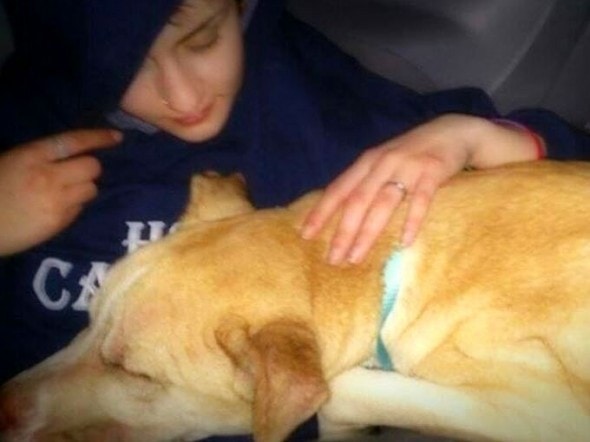 We had to run home at around 7pm, and when we got back up the mountain we saw Bear laying right where I had last laid with him. Dylan dropped me off, and I went straight over to him. Slowly, of course!  He let me snuggle right up to him and pet him. I spent the next two hours petting him and talking to him, and finally got a slip lead on him.

The slip lead part got interesting, as I was so tired and it was really dark so I couldn’t see what I was doing. I ended up resting the slip lead on his snout, and accidentally put my fingers in his mouth and nose….. He wasn’t amused, but he allowed it!

This was the point in which he decided he never wanted to walk again.
From 9 pm on I had to carry him everywhere! I had to pick him up and put him in the truck and then we snuggled together until we got to the vet… where again, I had to carry him inside… all 57 lbs of him! 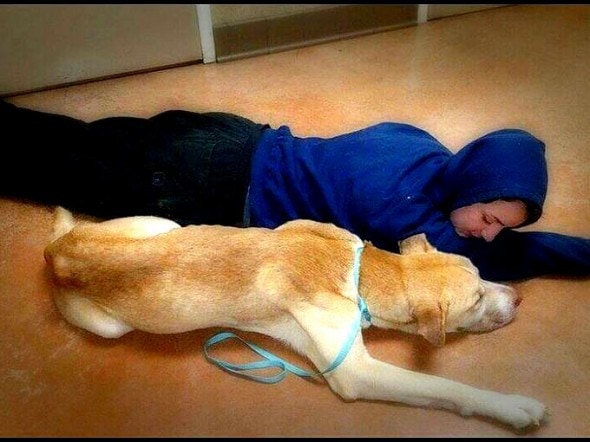 We are so happy to say that Baby Bear is getting the medical attention that he desperately needed, and will be going to a rescue until we can find his family or, if they are not found after 30 days, a new forever home!

REST ASSURED we are going above and beyond in trying to locate his owners, in case he was lost on accident and his family is missing him. We are contacting all shelters and vets to make reports and are checking two years’ worth of Missing Dog posts!

Www.facebook.com/lostfoundpetswastate
IF YOU MAY KNOW this dog, please contact us at 253-327-5318! 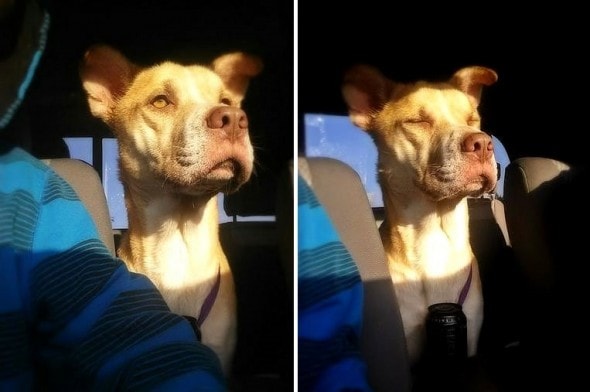