A couple from Pennsylvania were driving on Route 209 in the Marshalls Creek area on March 1, 2015, when they saw a black Pit bull lying on snow, unable to stand on his own. The dog seemed hopeless and if it wasn’t for the couple, the stray would have died within hours.

The good Samaritans picked up the dog and took him to AWSOM Animal Shelter, where staff couldn’t believe the extent of his abuse.

“We have people bring in dogs all the time, but when they removed that dog from that crate, I literally cried, the worst we’ve seen here in a long time,” AWSOM board member Sandra Fellin told WNEP. 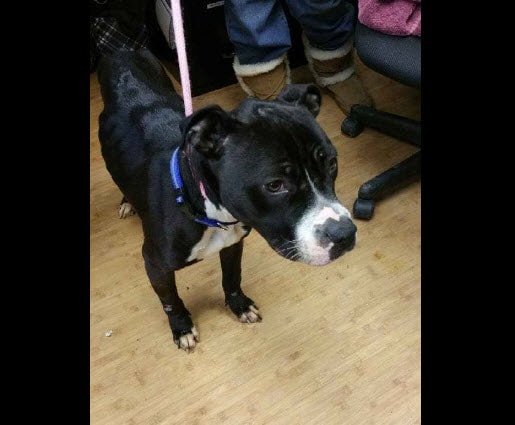 The Pit bull, now named Bronson, was malnourished down to his own bones. He had raw pressure sores on his bottom and his bones were visible. His paws and nails were discolored and rescuers believe the dog was probably kept in a crate or small space where he was forced to live in his own urine and feces. Bronson’s immune system was so weak that he suffered from Babesia (a blood parasites), anemia, and respiratory infections. What’s worse, the stray also has a level one heart murmur.

Bronson was transferred to Creature Comforts were he was kept in isolation while veterinarians treated his multiple illnesses. After days of intensive care and after vets worked hard to stabilize his health, Bronson was moved to a foster home. There, AWSOM hopes the abused dog will heal while he is surrounded by love.

Bronson is not out of the woods yet, but AWSOM is hopeful he will make a complete recovery and then find his forever home.

Fellin says that even though the only thing Bronson has known is abuse, his personality is of a gentle loving dog who wants nothing more but a loving owner of his own.