Citing death threats from angry members of the public, hospital administrator Gilbert Velasquez of the Southern California Veterinary Specialty Hospital has confirmed the termination of  Kimberly Nizato, the California woman charged with tying a German Shepherd out and leaving it to starve for five weeks. In a statement issued last week, Velasquez had indicated that the hospital intended to continue Nizato’s employment after she proclaimed her innocence in a private conversation. Hospital officials reversed that decision when evidence led to formal charges in the case and Velasquez began receiving death threat calls. 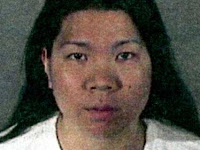 Nizato is free on $20,00 bail pending arraignment on May 12. A web page has been set up for fans and supporters to keep tabs on Courage during the recovery process. Donations are sought to help cover the cost of his treatment. See the most recent video update on Courage here.