In Cheshire, England, Karen and John Anderson were sentenced to 18 weeks in prison and banned from owning animals for 10 years. This sentence comes after authorities discovered that during two years the couple kept two Staffordshire Bull Terriers caged for 22 hours a day. 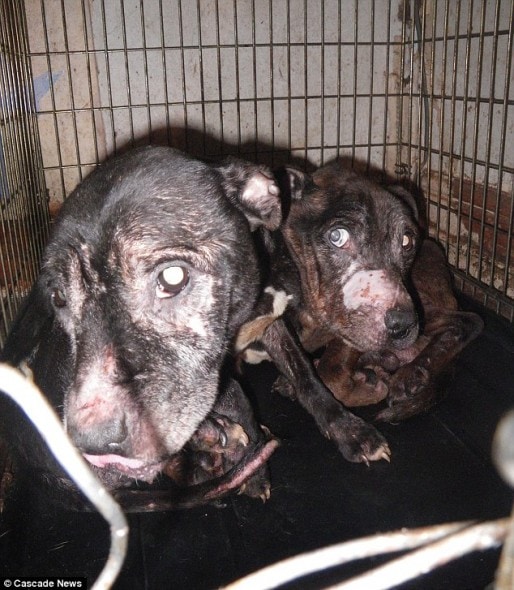 The dog abusers owned 10 year old Jet (female) and 12 year old Tye (male), but kept them locked inside a wire caged, hidden behind an old sofa in an unused bedroom, because thetwo innocent pets didn’t get along with the Andersons’ two other dogs.

“[The dogs were] emaciated with ribs, spines and skulls all visible,” said prosecutor Kevin Worthington.

The discovery was made back in January 20, and when found the dogs were malnourished, had damaged teeth, were covered in sores and scars, and were unable to walk.

Jet and Tye had to live in their own urine and feces while slowly starving to death. The sores, scars and damaged teeth resulted from the animals’ desperate attempts to escape their cage.

According to court reports, the Anderson owned other pets with whom they shared their lives and home, but Tye and Jet rotted away in the unused bedroom.

“This case is truly shocking,” District Judge Bridget Knight said while addressing the Andersons in court. “I have seen the photographs of these two dogs that were family pets kept as prisoners. I can’t conceive how you as human beings and dog owners could sleep night after night when you knew these two animals were suffering greatly.”

The RSPCA is now caring for Jet, Tye, and the other house pets.