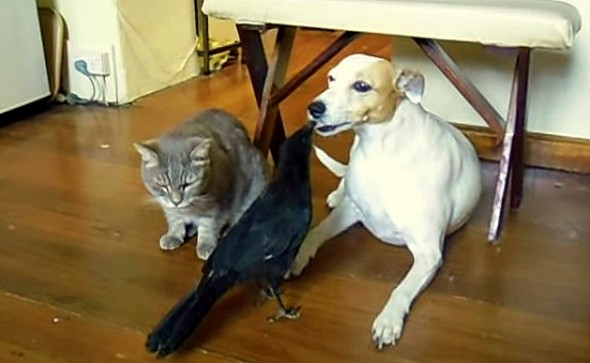 Cha Cha is a white-winged chough (a type of Australian crow) who loves bringing food to her siblings.  This wouldn’t be so bizarre if her siblings weren’t a dog and a cat, but these are very intelligent and affectionate birds, and they love taking care of everybody!

“[Cha Cha] has started feeding our dog ‘Skye’ and also our cat ‘Kitten.’  It is so sweet to watch. This is one of many video clips we have taken of ‘’Cha Cha’’ feeding her friends,” said Loz Westley on one of the videos she uploaded nearly three years ago.

“This white winged Chough is not a domestic pet. We picked it up (injured) on a road couple of months ago and nursed it through to good health.  It still can’t fly because of wing damage, but has adopted us and our pets as ‘family’ and never leaves our sides. Very affectionate, but also very bossy and has an ‘attitude’ if anyone tries to take something off him. This is why it is so sweet to witness him sharing food now.”

“All my pets are rescued from death-row, dumped, or injured off roads. Skye is a timid dog, because of former abuse, who at time of video-ing was getting sick of Cha Cha annoying her & trying to feed her all day,” Loz continued.  “If my voice sounds raised when I call her, it is because she is semi-deaf, & I only use short one word commands for her. Some comments below [on YouTube] suggest I abuse my beloved ‘babies’…..NEVER!!! … I adore them all. I have spent my whole life rescuing abused, dumped & injured animals & birds, & they all have to get along with each other when they live together. (This is only three of them by the way.)  Cha Cha, being a Chough, will naturally try to feed everyone and everything. It is in their blueprint as a ‘family’ bird.”

Over two years later, Cha Cha is still part of the family, and is still annoying everyone with her overly motherly tendencies – even people!

“Cha Cha is still the ‘boss’ of all our pets (and visitors, haha).  She flies up to everyone with either a nice juicy caterpillar, moth, spider, worm for them to eat, and won’t take ‘NO’ for an answer, so you have to pretend to eat it…… freaks a lot of people out,” Loz said.