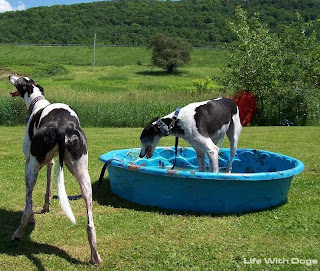 Those who run in Greyhound circles have likely heard about the closing of the Dairyland Greyhound Park in Kenosha, Wisconsin. Many posts are to be found on discussion forums and Facebook, and I have received twenty three messages regarding the shutdown. A moron put a bogus post on Craigslist about 900 dogs in danger of being put down.

There are a few versions of the story, but the most accurate information available thus far is as follows:

•The track is indeed closing December 31st 2009.
•The exact number of dogs is not yet known, but is likely to be well below 900. Some will be moved to other tracks to continue to race. Exact numbers will be known in mid December.
•Relocation planning is already taking place. I would encourage anyone who wants to assist to contact the track directly (as I did) or to contact Greyhound adoption groups in Wisconsin and surrounding states.
•The facility will stay open until all dogs are relocated. They will not euthanize.

Link to groups who are already arranging for adoption of these dogs:  http://www.doa.state.wi.us/docview.asp?docid=863

If you are not affiliated with rescue groups, but have at some point considered adopting a Greyhound, this is a great time to do so. There are going to be a lot of newbies flooding the market.