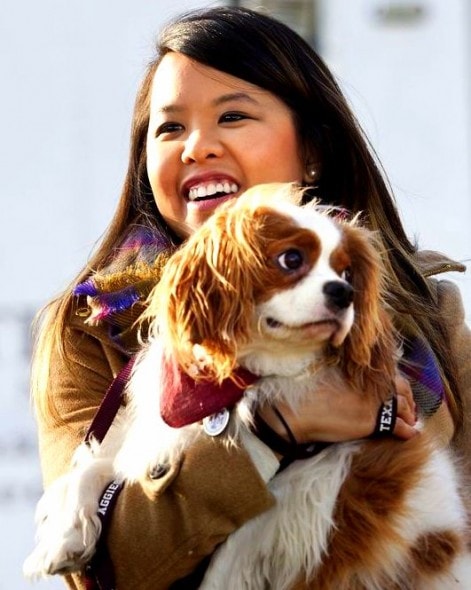 Nina Pham, the Texas nurse who has been recovering from Ebola, has been reunited with her dog Bentley, both of whom just got out of quarantine.

“I’d like to take a moment to thank people from all around the world who have sent their best wishes and prayers to me and Mr. Bentley,” said Pham at a press conference on Saturday.  She was thrilled to “have my best friend by my side again.”

They hadn’t seen each other since October 12th, when Pham tested positive for Ebola after treating Thomas Eric Duncan, who had died a few days earlier.  Her Cavalier King Charles had already been in close contact with Pham by the time symptoms developed.

Dallas officials did not want Pham to endure the same fate as the nurse in Spain whose dog was euthanized without even having been tested.  Bentley was instead tested and placed in quarantine.  He was cared for in the former residence of the executive officer at Hensley Field (military air base). 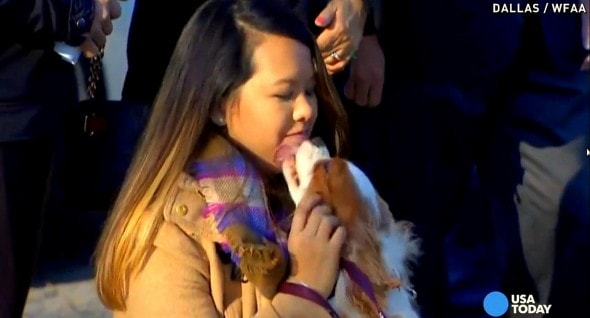 Being in quarantine wasn’t as bad as it sounds.  Specially-suited staff members kept Bentley company and played with him until he was due to be released.

“We are going to miss seeing Bentley every day,” said city spokeswoman, Sana Syed. “He had a long bath this morning and hugs from Dr Bissett.”

Pham and Bentley have some catching up and celebrating to do.

“Right now, I’m just excited to take Bentley home so we can start picking out his gifts for his two-year birthday party this month,” she said.