More than 20 cases of the life-threatening bacterial infection leptospirosis have been reported in Detroit-area dogs in the past three weeks, according to Michigan State University’s Diagnostic Center for Population and Animal Health.

Experts at the MSU center, a service unit of the College of Veterinary Medicine, diagnosed the specific strain of the disease, which can cause fatal damage to dogs and can be transmitted to humans.

In most cases, the dogs were not vaccinated against leptospirosis, or they had an uncertain vaccination history. Because this particular type of leptospirosis is associated with contact with rats, stray dogs are typically thought to be at highest risk.

“What is particularly unusual about this outbreak is that the dogs affected are not stray animals, but people’s pets,” said Carole Bolin, 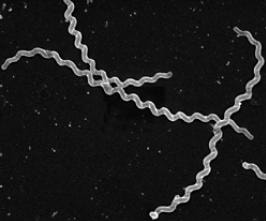 director of the Diagnostic Center. “Unfortunately, we expect to see more cases, and this is a very dangerous type of leptospirosis. Many veterinarians have never seen this type in dogs because it was markedly reduced by vaccination.”

Bolin and her team performed diagnostic testing and identified the particular strain of infection as icterohaemorrhagiae, which can cause severe disease in humans and animals. It is commonly carried by rats but also can be transmitted dog-to-dog or dog-to-human. Bolin is aware of nine dogs that died or were euthanized as a result of the disease, but there may be others.

“The Diagnostic Center became involved because of our experience, expertise and our desire to help the public,” Bolin said. “Our diagnosis helped identify this relatively rare strain, and the samples we tested will provide teaching tools for our students and residents so they will recognize this disease in the future.”

Leptospirosis spreads by infected wild and domestic animals. The bacteria ( leptospira ) that infects these animals can reside in their kidneys, and the host animal may or may not appear ill. They contaminate their environment with living leptospira when they urinate. Pets can become infected by sniffing this urine or by contacting standing water that becomes contaminated by rain and water runoff.

The bacteria spread rapidly through an animal’s blood stream, usually causing fever, depression and vomiting. The bacteria also attack the liver and kidneys, which can lead to organ failure.

“This is a very serious, rapidly progressing type of leptospirosis in dogs,” Bolin said. “Dogs can appear normal one day and be severely ill the next day. People can become infected, so this also is a threat to animal owners, caretakers and veterinarians.”

In the 1980s, Bolin’s mentor Alex Thiermann conducted studies on the high leptospirosis prevalence in the rat and dog population in Detroit. Leptospirosis caused by icterohaemorrhagiae was identified as a cause of human cases and as a common infection in rats and stray dogs. The prevalence of leptospirosis dropped significantly after the conditions predisposing to large rat populations were corrected.

Also, a leptospirosis vaccine was routinely administered to dogs, greatly diminishing the number of cases. As cases of disease in dogs decreased and because of the vaccine’s potential for adverse reactions, vaccine use diminished and it no is longer given to all dogs. However, Bolin said this outbreak demonstrates that leptospirosis remains a significant risk for dogs.

“There is something we can do now to prevent this disease and that is to vaccinate,” she said. “Dog owners need to contact their veterinarian to get more information regarding vaccination.”