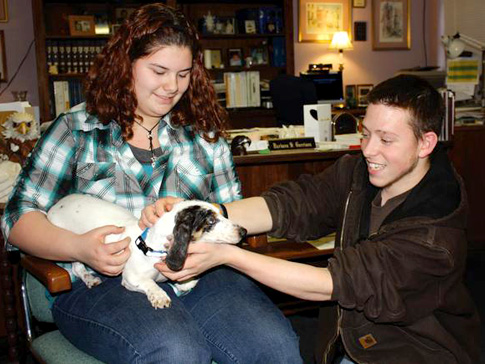 Missouri’s School for the Deaf has taken in a Dachshund puppy fluent in sign language, trained and donated by Puppies for Parole, a program designed for puppies and dogs that need to be behaviorally rehabilitated or have had no training at all.

The idea made sense to inmates at a Missouri prison who trained a deaf dachshund in sign language and then asked the Missouri School for the Deaf in Fulton to take him in.

Today, the dog named Sparky is right at home with the school’s youngsters, who have taught him additional sign language. And a second deaf dog, a Boston Terrier named Petie, may be on his way to the school soon.

Superintendent Barbara Garrison approved bringing Sparky to the school. “She really thought it would be a great learning experience for the kids,” Garrison’s secretary Barbara McGrath said in an interview Tuesday.

Sparky came from the South Central Correctional Center in Licking, Mo., which has also offered Petie. Garrison is interested in taking in Petie but only if she knows it can eventually be placed in a permanent home after some sign language training, McGrath said. 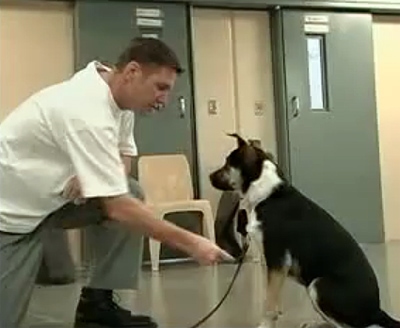 Sparky responds to hand signals to sit, heel, lay down, and stop and is working on additional signs that mean “food” or “outside.”

Sparky and Petie come from the Puppies for Parole program of the Missouri Department of Corrections in which inmates train animals with behavioral or other issues that make them difficult to adopt. The program saves dogs that might otherwise be euthanized and it gives inmates a constructive activity, said Tina Holland, activities coordinator at the Licking prison.

“It’s been wonderful — it’s gone far beyond what we thought it would be,” Holland said. “Their goal is just to get these dogs a home.”

Puppies for Parole is a unique program made possible through partnerships with animal shelters and animal advocate groups statewide. Selected offenders have the opportunity to become trainers to rescue dogs in the program. Offenders work with the dogs teaching them basic obedience skills and properly socializing the animals, making them more adoptable.

Once the dogs have successfully completed the program they will be sent back to their original shelter to be placed up for adoption. Last year in Missouri, more than 46,000 homeless canines were euthanized. Puppies for Parole hopes to reduce that number by producing loving, obedient, adoptable dogs.

*Update 5-11-11 – a new report provides another look at Sparky now that he’s settled in.